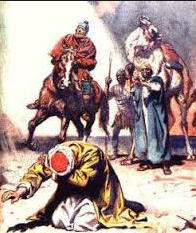 In the book of Acts we find two reports of the calling of Saul on his way to Damascus; a classic example of so-called contradictions in the Bible. Often they are performed to prove that the Scripture might be unreliable. It concerns the following two verses: In Acts 9: 7 we read:

Now the men who are journeying with him stood dumbfounded, hearing, indeed, the sound, yet beholding no one.

Now those who are with me gaze, indeed, at the light, yet they hear not the voice of Him Who is speaking to me.

If we take a closer look at both verses we notice in short time that the first claimed contradiction, only demonstrates an inaccurate reading. Because of course it is no contradiction that Saul’s bystanders saw the light, but didn’t notice Jesus’ appearance to Saul in a heavenly radiance. It is just additional information. A little more difficult is the difference that in the first verse the fellow travellers did hear the voice and that they didn’t in the second. But on closer inspection this is also seemingly contradictory. Because ‘hear a voice’ can be explained in two ways. Hear that someone says something is different than hearing what anyone says. From Acts 26: 14 we know that Saul was called in Hebrew dialect. Possibly Saul’s fellow travellers did not speak that language and only heard an unintelligible voice. ……This suggestion is also confirmed when we pay attention to a subtle grammatical case-difference between both renderings. In 9:7 the fellow travellers did hear “of the sound”  but in 22:9 didn’t hear  “the voice” (concordant literal translation) In short, the travellers saw a special light and heard a sound, without having any idea who appeared to Saul. They didn’t see Jesus and they also didn’t understand what He said. Those who plead such verses as to be a contradiction in the Bible, are like Saul’s fellow travellers. They show that they don’t know the ins and outs of the matter.