How about Saul & Paul?


In response to my daily article of January 3rd I received a critical reaction via Facebook. It would be pure invention. My opponent (KB) motivates his complaint in six points. I think it’s worth checking them one by one.

a) A double name was common, especially for Jews in the Roman Empire.

b) As a Roman citizen Sha’ul was given a Roman name at his birth.

It is very possible and probably very likely that Paul was the Roman name of Saul. But that just underlines that the apostle acts as an apostle of the nations as from Acts 13. His Roman name matches with that role.

c) Sha’ul’s name, unlike other name changes, hasn’t been established by God or Christ (as with Abram, Sarai, Simeon (Peter) or Jacob (Israel)).

In Acts 13: 9 Saul receives another name by Luke. Befóre this occasion Luke consistently called him Saul, and áfter it just as consistently Paul. Is that random? Wasn’t Luke inspired by God? Would this change have nothing to do with the visit to Proconsul Sergius Paul (13: 7)? Note: this is the first time the name Paul is mentioned in the Scripture anyway! And two verses later Luke mentions that Saul is also Paul and from this moment he consistently calls him Paul.

d) There’s a very logical reason for using Paul and not the Greek form of Sha’ul: Saulos. The Greek word saulos means ‘effeminate’ or ‘affected’.

If this Greek association would be the reason for Luke to avoid the name Saul, why does he call him Saul, about twenty times in his Greek report to Theophilus (1: 1)? Why didn’t Luke call him Paul from the beginning? In short, this argument is irrelevant.

e) The etymological derivation of the Greek verb pauo(mai) is unfounded: the “L” in (PauLos) isn’t coincidental. If this derivation was correct, than his name would have been PauZos (with a dzeta).

The name ‘paulos’ (=stopper), as a derivation of ‘pauo’ (=to stop) doesn’t differ from this design.

f) The claim that in God’s plan of salvation would occur a ‘pause’ is a theological statement. Nowhere in the Scripture I see an interruption or change in the message or dispensation of Paul. So that statement is theology, specifically dispensational theology (doctrine of dispensations). There is no reason or need to divide God’s acting of salvation in ministries. Grace was just about the first thing that was given to man in Eden, and for sure it wasn’t new in the New Testament.

It’s this interruption (temporary termination) in the history of salvation that we see illustrated in the confrontation with Elymas. The Jew Elymas is ‘stopped’ by Paul’s word, because he is blinded for a while. So from that time the word of salvation goes out to the nations (Sergius Paul). That’s the dispensation of the apostle Paul!

In short: I don’t see any reason to speak of a name change:

The name change in Lucas’ report is simply a statement. Befóre the confrontation with Elymas the apostle is consistently called Saul, and áfter that time the same consistently Paul. Only when Luke after Acts 13 reverts to occasions befóre that confrontation (22: 7, 13; 26: 14) he speaks again of Saul. In short, the name change by Luke is evident and cannot be reasoned away.

In that case Luke would reserve the name Paul for a Greek-Roman context. But that is not the case, because when he returns to Jerusalem (Acts 15 and 21- 23) his name is still, as usual, Paul. Luke doesn’t change his name in Saul. Even when the apostle speeches in Jerusalem in Hebrew language, Luke continues calling him Paul (Acts 21: 40). The apostle of the nations still has his Greek-Roman name.

In short: Luke places Acts 13: 9 as a milestone. The “stopping” of Elymas and his temporary blindness, to enable the pagan Proconsul Sergius Paul hearing the word of God, marks the introduction of the name Paul. 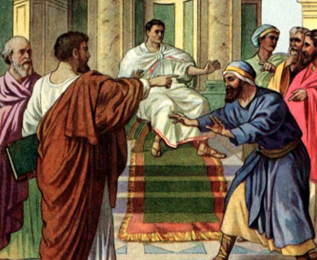