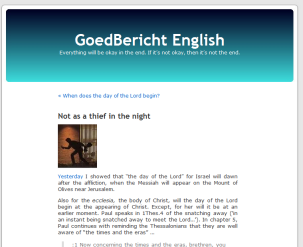 With Peter Feddema (1930), a retired teacher in Ontario (Canada) an enthusiastic reader of the Good News weblog, have I since 2009 regularly been in touch via email. He was born in and raised in Overijsel/Drente in the Netherlands and emigrated to Canada, together with his parents, in 1949. In spite of having lived in Ontario for already a little more than sixty years, Peter and his wife have not the least difficulty with Dutch in order to follow what is posted on my website. A little while ago, he translated some for a friend with whom he desired to share a few Bible subjects. He sent me a copy with the suggestion that I do with it what I thought best.Initially, it occurred to me that it would be interesting to post them on a Facebook community page, but when a couple of additional blogs followed, the idea of starting a separate weblog for English speaking visitors developed. The quality of the translation is excellent and are very worthwhile to make available for a larger public reading. Many thanks, Peter!

In 2006 a fellow countryman, Martin Kleverwal, had translated a study (What is Conciliation?) for his interested American friends. I’ve received many positive reaction to this article. That is why I am very happy that Peter Feddema, without any claim of planning such, has began translating and has expressed his willingness to do more translation work. To write studies in English myself, is not an option, because of the great amount of time it would require and, especially, the result of my English writings would certainly be below standard for publication. That is why with much gratitude I accept this opportunity that presents itself. The translations are done entirely on Peter’s own initiative and are planned without explicit guarantees of regularity. Only from my side I promise to place additional translations on the Goedbericht English weblog, as soon as they arrive. Here is a LINK to the new weblog with a list of available blogs/articles.