Lo! With what size letters I write to you with my own hand!

Paul used to dictate his letters to a secretary (Rom.16:22). What he consistently did was sign all his letters personally with a greeting (2Thes.3:17). In the Galatians letter he apparently wrote not only the greeting at the end, but the entire conclusion with his own hand. The fact that Paul (exceptionally) recorded these words with his own hand emphasizes that he did not want to leave this message to someone else.

The apostle calls attention to the fact that he wrote with such large letters. It was not noticeable that he wrote in capital letters, everyone did. It is more likely that he could not write smaller so that the readers immediately understood that the remarkably large type was Paul’s. There has been much speculation as to why he had to write such large letters. Were his hands damaged by hardship or labor? Was there something wrong with his motor skills? These are not much more than guesses.

Only one statement stands out for good reason and was already discussed in the discussion of 4:15. Paul had problems with his eyes and the Galatians knew about it. Did this eye trouble perhaps recall the dazzling light with which he had once been called? 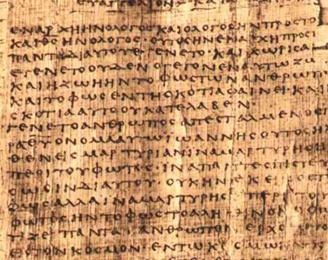