O foolish Galatians! Who bewitches you, before whose eyes Jesus Christ was graphically crucified?

Paul’s historical record from 1:11 onwards intended to show that the Gospel he preached is not according to man because he neither received nor learned it from man. From chapter 3:1 Paul’s direct answer to the Galatians begins. But it certainly doesn’t start with a cool, business-like explanation. The indignation literally jumps off the paper, as the letter also started right after the salutation (1:6-10). And just as Paul did not spare Peter in Antioch (2:11), so neither does he spare his readers in Galatia. “Foolish Galatians” he calls them. They’re out of their mind! crazy.

What happened to the Galatians cannot be explained rationally. They were enchanted (Latin fascinated) or bewitched and Paul wonders in horror who could have made them so mad. Note the contrast between what the preachers in Galatia did (the “some” in 1:7) and what Paul had done among them. The ‘newcomers’ bewitched. Paul, on the other hand, had shown before their eyes “graphically” (the same word as in Romans 15:4!)how Jesus Christ was  as the crucified one. The Scriptures opened with Paul (cf. Acts 17:3)! 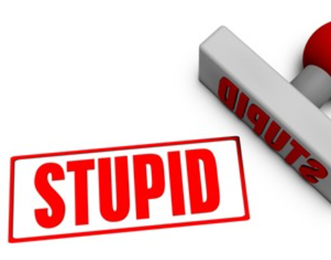