…and be walking in love, according as Christ also loves you, and gives Himself up for us, an approach present and a sacrifice to God, for a fragrant odor.

Subject is GOD’s love for us, demonstrated in Christ. Christ has given Himself up for us. As “an approach present and a sacrifice”. Usually is thought of Golgotha, the place where Christ was slaughtered. In itself that’s right, but incomplete. Because on the cross the slaughtering took place, not the sacrifice.

Christ’s offer is what took place after his slaughtering. Like a sacrificial animal first was slaughtered, to be raised afterwards on the altar, to ascend in fire and fume. The first speaks of Golgotha, the second speaks of Christ’s raise and resurrection. It speaks of the new life that appeared in his resurrection from the dead (as Firstfruit!).

Thát is the fragrant odor for GOD. Christ died… to raise up. And to give that Life to mankind. Life, for a world of mortals, who crucified Jesus. That is love, isn’t it? And in that love and the fragrant odor of his sacrifice, we can walk! 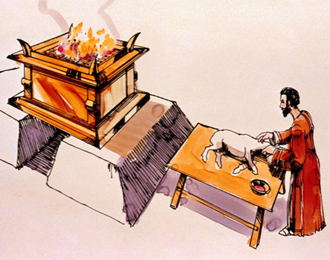