…in Whom we are having the deliverance through His blood, the liberation of offenses…

The central idea in this verse is liberation. With ‘deliverance’ we think of the ransom which is paid in order to set the prisoner or slave free. The words “through his blood” indirectly refer to this ransom. He paid this price in order to be resurrected and thereby conquer death. Death in which the whole of humanity is held  captive. Death is the prison, so the life of resurrection is the deliverance.

Most translations don’t use ‘liberation’ but ‘forgiveness’. That is a pity, because that meaning is far too narrow. The Greek word ‘aphesis’ literally means: ‘release’. In Luke 4:19 this same Greek word is used as well. The text speaks of the liberation of prisoners. ‘Aphesis’ doesn’t merely mean that the past is no longer charged, but that someone is now set free. Those who believe are “in the beloved” (:6) and made one with him in his resurrection. That is how GOD reckons. So we do not fight against the sins (offenses) and we do not worry about it either. We LIVE.. unconcerned before GOD. That is what it means to be set free, to be released! 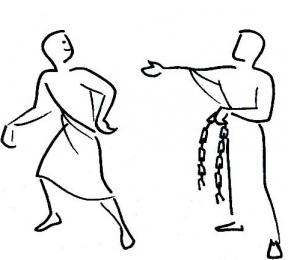