From a visitor to the GoedBericht-site, I received a question about burial and cremation (from a Biblical perspective). Below is my response:

What I read in the Bible about cremation is that people, as a consequence of an negative judgement, were to be burned (Gen.38:24, Lev.20:14, etc.). Consider also the last verse of Isaiah where mention is made of Gehenna (the Valley of Hinnom) in which the burnt corpses of men, who had transgressed against the Lord, could be seen. “The lake of fire” in Revelation (20:14,15) is actually presented as a large crematorium.

When the time will have come for a resurrection, God will be able to find everyone, whether they had become ashes or dust. Would He, who formed each person out of two, invisible-to-the-eye cells, be unable to resurrect the same person from, either, dust or ashes?

Why a believer would choose to be buried instead of being cremated, is not because of a law or prohibition, but because of the symbolism behind it. Fire symbolizes “finished and gone”. It puts a definite point behind the past. For many people this is also an important ideological motive. Life is over, period, and therefore their choice is “to go up in smoke”.

Being buried, on the other hand, is a representation of sowing in the earth, with the prospect of new life that will rise again (1Cor.15:35-44). Where cremation places a period behind the past, a funeral demonstrates: to be continued. Being buried symbolizes expectation. The standing stone on the grave, as pillar, confirms this expectation: the one who lies here will arise! Burial is an ode to Him who, as the Firstfruit, emptied the tomb, as a guarantee of life for every child of Adam! 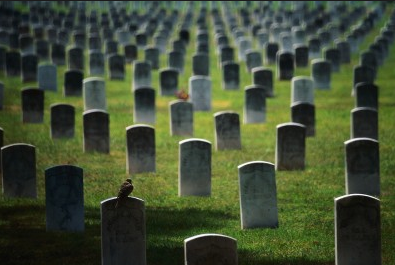