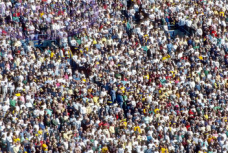 explosive Yesterday, according to the official census of the United Nations, the seven billionth (7,000,000,000) citizen of the world was born. That is, however, only an estimate, because it could be a miscalculation of many millions. But anyway, what does it matter with respect to such an incredible number. Population growth continues at an alarming rate, because the sixth billionth citizen of the world is just twelve years old. And to think that not until the early nineteenth century, the world population rose to one billion, and that it took another one hundred years to reach two billion. Only after the Second World War has the world population, particularly in the developing countries, exploded. In sixty years the number increased by 4.5 billion people. This year, every minute, twenty children are born and eight people die… “no benefit …” The UN and its many experts exclaim ‘alas and woe’ concerning the improbable population growth and the associated consumption, which the earth (according to them) cannot sustain. Nico van Nimwegen, deputy director at the Netherlands Interdisciplinary Demographic Institute, remarked: “There is not a single benefit to a number of seven billion.” Of course, he is entitled to this opinion, and when we consider what the world, in the coming decades may yet experience (read especially the Biblical prophecies), then one is indeed open to becoming filled with a good measure of fear and foreboding. not true And yet … it’s not true what this gentleman says about there not being any benefits. When I hear of this large number of people who currently populate the world, it reminds me of the truth that the living God is the Saviour of them all! And please do not take this as does the average Christian, namely, that God wants to be a Savior of all those people, but that they must, of course, also like to be saved… Listen to what Paul said:

Faithful is the saying and worthy of all welcome (for for this are we toiling and being reproached), that we rely on the living God, Who is the Saviour of all mankind, especially of believers. These things be charging and teaching. 1Timothy 4:9-11

So I say, Welcome seven-billionth citizen of the world; the living God is your Saviour!!!! If there will ever be anyone who will ever tell you this, I do not know, but one thing I do know: you will eventually realize it and sincerely acknowledge: “Jesus is Lord”, to the glory of God the Father! (Phil.2:9-11). ——————————— translation: Peter Feddema