According to th e Scriptures, the history of the world until the great (world-)Sabbath consists of six thousand years, as we have determined until now. Divided in three equal parts: three times 2000 years. From Adam until the birth of Abram 2000 years. Consequently again 2000 years until putting aside of Jerusalem, after Stephen’s stoning. And the time period of Israel’s setting aside would again last for 2000 years, or like the Lord counts, “two days”.

His days shall be one hundred and twenty years

6000 years correspond to 60 centuries, or 120 cycles of jubilees. That is a remarkable number of years. In the first place, it reminds us of the rather cryptic statement we find in Genesis 6:3 (literally translated):

And Yahweh said, my spirit shall not adjudicate in humanity until the eon for he is flesh. His days will be one hundred and twenty years.

From the context it is not directly clear to what these 120 years relate to. It is commonly attributed to the time period from the start of the construction of the Ark until the great flood. Although this seems to be a suitable option in this context, the wording does not give a direct clue in this direction. Neither to the construction of the ark, nor to the beginning of the great flood. The wording is broad:  To humanity will be adjudicated in 120 years. Doesn’t this adjudication to humanity take place foremost at the dawn of the Messianic kingdom? And doesn’t the start of the seventh millennium coincide with the 120th jubilee? Moreover, isn’t a jubilee eminently a Divine year in which He adjudicates? Genesis 6:3 therewith provides a confirmation of the length of time which leads up to the coming eon.

The 120 jubilee-cycles from Adam until the beginning of the Messianic kingdom is also beautifully illustrated in the life  of Moses who became to be 120 years of age (Deut 34:7). His life is subdivided in three times forty years.

The first forty years of Moses’ life has as its most markedly event the fact that he was taken out of the water. His name is also derived from this. He laid in a box of papyrus. Box in Hebrew is the same word as the word for Ark in which Noah and his family were kept. As the Ark and the rescue out of the waters characterize the first two thousand years (= 40 jubilees) of world history, so were the first forty years of Moses’ characterized through these as well.

The second time period of forty years began when Moses started to look after his brothers (Acts 7:23). This period runs parallel with the time period from Abram until the death and resurrection of Christ. Forty jubilees. Although God was looking after his people, all this time they were in slavery. Exactly like the Scriptures describe the position of Israel under the old covenant.

The third period of forty years begins with the rescue out of Egypt, while subsequently Israel doesn’t reach her destination yet. It runs parallel with the last 2000 years: the great salvation has been realized while Israel, still has not arrived in the promised kingdom yet, because of unbelief.

At the end of these three times of forty years, Israel arrives at the border of the promised land. Moses, Israel’s inaugurator died while Joshua as perfecter would finally lead them into the promised land. Exactly like the true Joshua (Jehoshua = Jesus) will lead the people of Israel into the promised sabbatical peace (Hebr. 4:9). After three periods of 2000 years or 3 times 40 jubilees. More about that a next time. 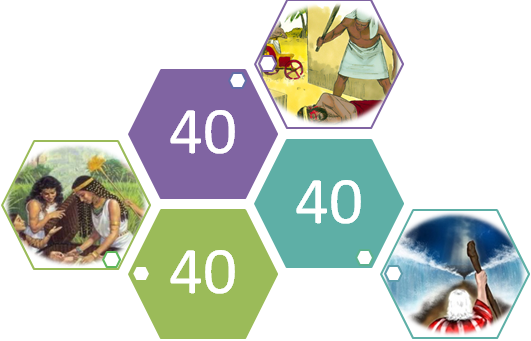