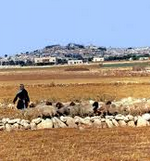 in the middle of the winter night … or in the spring?

The entire Christian world and far beyond it, celebrates around these days the birth of Jesus. This is remarkable, because it is fairly common knowledge that Jesus was not born on the 25th of December. Bible scholars usually point to the Jewish feast of Tabernacles (Sukkot), as being the most likely time that Jesus was born. For a number of years, already, I’m thinking differently about this. In Luke 2 it is explained that Jesus, as a twelve year old boy, went with his parents to Jerusalem to celebrate the Passover. When I read the Interlinear text, in the Bible program of ISA, I saw the following:

If I take the literal view, as it presents itself, Jesus BECAME twelve years old when he went to Jerusalem. Wow! Does Luke, here, mention when it was Jesus’ birthday!?! If so, then it was just before Passover. There is one date that stands out in this connection: the 10th of Nisan (or Aviv). That is the day on which the Israelites took into their houses a lamb to be slain on the 14th of that month (Ex.12:3-6). You likely know that Jesus, as the sacrificial Lamb, died on the 14th of Nisan (1Cor.5:7). What date would better qualify for the birthday of Jesus than the 10th of Nisan? That was the day the Lamb entered the house of Israel?! It was also the date on which, years later, accompanied with songs of celebration and with shouts of Hosanna, He entered Jerusalem from the Mount of Olives.

lying in a manger

Yet another interesting note: when the shepherds in the fields of Ephrata were keeping watch over their sheep, a heavenly messenger came and told them: “…today was brought forth to you a Saviour… in the city of David. And this is the sign to you: you will be finding a Babe… lying in a manger” (Luke 2:11,12). The child born on that day lies in a manger, i.e., a feeding-trough for cattle. And that is called a ‘sign’, that is to say, it is significant. Well, if this “today,” is the 10th of Nisan, then the meaning of the manger at once is clear: It refers to the lamb that on the 10th of Nisan was taken into the house and had to be taken care of.

But this is not all. If Jesus was born on the 10th of Nisan, it means that He was circumcised on the 17th of Nisan, the eighth day (Luke 2:21). But this is precisely the date that He rose from the dead! How striking is that, because circumcision is an emblem of new life and fertility. Mere coincidence?

And yet another confirmation: concerning John the Baptist, we know that he was half a year older than Jesus (Luke 1:36). When we count from the first month of Nisan (about April) six months back, then we come out in the seventh month, Tisri. This is the month when the Feast of Tabernacles is celebrated. But not only that: the 10th of Tisri (exactly half years before Nisan 10), Israel celebrates Yom Kippur, the Day of Atonement. Would that have been the day that John the Baptist, the son of the priest Zechariah, was born, he who later on, at the Jordan river, would loudly announce: “See the Lamb of God which is taking away the sin of the world!” (John 1:29)? I am not saying that John was born exactly on that day, but that the half-year age difference suggests that date. Dear reader, I write this not to disrupt your Christmas. I just want to show how ‘full of wonder’ was the day on which Jesus was actually born. Oh Happy Day!