| Blog English | and LO! the curtain of the temple is rent…

and LO! the curtain of the temple is rent… 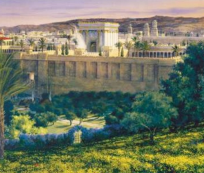 There are two places in Jerusalem that are generally designated as the place where Jesus was crucified. Since Emperor Constantine (in the fourth century), one of them is the Holy Sepulcher on the west side of the old city. And since the 19th century, is there also the Holy Sepulcher Garden at the Damascus Gate on the north side of the old city. That Jesus was crucified outside the gate of the city (Heb.13:12) is well known. But there is one important Biblical detail that is, generally, overlooked, but it rather precisely points to the direction of the location of Golgotha. Both Matthew and Mark, as well as Luke, mention that, at the moment that Jesus died, the curtain of the temple tore, from top to bottom. In Luke 23, it is recorded:

(…) Now rent is the curtain of the temple in the middle. 46 And shouting with a loud voice, Jesus said, “Father, into Thy hands am I committing My spirit.” Now, saying this, He expires. 47 Now the centurion, perceiving what is occurring, glorified God, saying that, “Really, this Man was just!”

What brought the Roman centurion to this recognition? He was impressed by what he saw! He saw Jesus die and at the same time, the curtain of the temple was rent! Matthew 27:50 says, “And LO! the curtain of the temple is rent…”. The words “and lo!” underline that it was noticeable. It is not about the curtain in the temple (in front of the Holy of Holies) that no one could see, but about the curtain of the temple, on the outside. Since the sanctuary was built on the east, the curtain was, at a distance, only observable from the Mount of Olives (Zech.14:4). Make no mistake: that curtain of the temple was colossal in size. Flavius Josephus describes that this curtain was no less than 7 feet wide and 24 feet high. That is the height of a building of 8 floors! If one stood at the top of the Mount of Olives, roughly at a distance of about kilometer, the way the crow flies (Acts 1:12), this huge curtain could be seen with ease. Jesus was not crucified west or north of the city, but to the east of the city. Golgotha is often (especially in songs) called a hill, but that has no Biblical basis. Each of the evangelists speaks of “a place called Golgotha” (Mat.27:33; Mark 15:22 and John 19:17). It was a place from where the curtain of the Temple could be seen. Only the Mount of Olives, can be considered as appropriate. The Mount of Olives plays a crucial (!) role in the great Biblical facts of salvation. Jesus died there and was buried there as well (John 19:41). And there, He arose from the grave and He also ascended into heaven from there (Acts 1:12) and in the future, His feet will stand there for the deliverance of His people (Zech.14:4). It is the mountain east of Jerusalem, where the sun rises. From where the night disappears and a new day will dawn!