As if a man is fleeing form the face of the lion, and the bear comes on him, and he enters the house and supports his hand on the sidewall, and the serpent bites him.

The prophet Amos argues that once YAHWEH’s day arrives, judgement is inevitable. There is no point in running away, because GOD knows how to find every person.

The picture in the above verse is significant. Someone flees from a lion and while fleeing he is ambushed by a bear. Or he manages to escape both and when he comes home he feels safe behind the door and leans his hand against the wall… and is then bitten by a snake!

Have we not seen such flight behavior around us in recent weeks? Man sees a great danger coming from a virus and flees in fear. Panic measures are taken on the assumption that they are safe. A ‘makeable society’ in which risks are excluded. Because experts advise us. But it is an illusion. Because behind the ‘safe’ closed door (locked down!) There is another, greater danger. If it is not a lion or bear, then it is a snake that bites. The Word makes is wise to see through that. 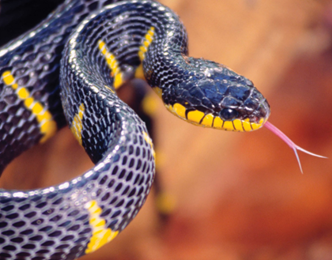