| Blog English | Adullam & the valley of the Oaks

Adullam & the valley of the Oaks 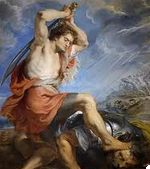 On Sunday Aug. 21, 2011, I had the privilege to speak in Rotterdam about the topic of David in Adullam (1 Sam.22). Amongst other things, the following thoughts are of interest: Adullam was a cave in which David, during the time he was persecuted by Saul (&gt;”Saul, Saul why are you persecuting Me?”), took shelter. The name Adullam is connected with the Hebrew word ‘olam’ which literally means ’hidden’. David went “underground” awaiting the throne whereupon he would rightfully sit in Hebron and later on in Jerusalem. The hidden place of shelter, which he shared with four hundred men, is an eloquent type of the secret work of God at the present time. It is remarkable that the cave of Adullam is located in the same region where earlier Goliath was defeated: near the valley of Elah, that is, the valley of the Oaks. David and his associates could not have found a more inspiring location. While they were misunderstood, chased all over the land, their place of hiding reminded them daily of the amazing victory God had given David. There, the head of the enemy was crushed. Literally, David had there chopped off the head of the giant… and consequently, had carried it to Jerusalem (1Sam.17:54)… where there is a place of a skull… and directly next to it, a cemetery garden… In short, the valley of the Oaks was a promising region, as even its name expresses, because an oak is a symbol of Gods faithfulness. It is the fruit of the oak (acorn) that uncovers the sign of Gods promise. The removal of the foreskin reminds us of Gods resurrection power and His victory over death! ——————————— translation: Peter Feddema