Now a certain young man named Eutychus, being seated on the window, sinking into a deep sleep while Paul is arguing still more, being sunk from sleep, falls down…

A wonderful history! About a certain Eutychus, whose name means something like ‘lucky one’. He was overcome by sleep during Paul’s preaching and from the window where he sat he fell dead. But Paul encourages everyone with the announcement that he would be alive. And so it happened.

This incident is more than a miracle. It is a sign! It is illustrative of the book of Acts. Eutychus is a type of Israel. Seated in the window, i.e. the people had a view! For was it not true that the promises had been given to Israel? They had a view of the Kingdom that would dawn in those days. But during Paul’s ministry it became clear that a spirit of deep sleep had come over them. And Israel fell out of the window – it was a deadly fall!

But the same apostle who speaks of Israel’s fall and rejection also knows of their taking back (Rom.11: 15). A taking back that will be no less than life from the dead! It is night in the world, but in the upper room where Paul’s word sounds, there is light and view. What a fortune! 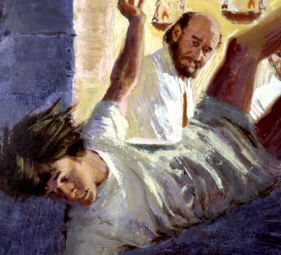