Then they return into Jerusalem from the mount called Olivet, which is near Jerusalem a sabbath’s journey.

Just moments ago, from the Mount of Olives, the disciples had seen Jesus go from them as a cloud hid him from their eyes. While they were still gazing at heaven, two men in white clothes assured them that this Jesus would return again. The same way they had seen him go. From Zechariah 14, we know it will also be in the same location. Jesus’ ascension on the Mount of Olives directs us upon his return.

From the prophecy we know that that return would be “after two days”. This is how the Lord reckons and we should not miss that according to Peter (2Pet 3:8) that for Him one day is as a thousand years. In exactly ten years, we will reach the milestone of two thousand years since Christ passed away.

The Mount of Olives speaks of the ascension while Jerusalem symbolizes “the city of the great king”. The special thing is that the distance between the Mount of Olives and Jerusalem (= a sabbath’s journey) corresponds to the distance in time between Ascension and the Second Coming. A sabbath’s journey is about two thousand cubits (Josh. 3: 4). Without a doubt: the time is near! 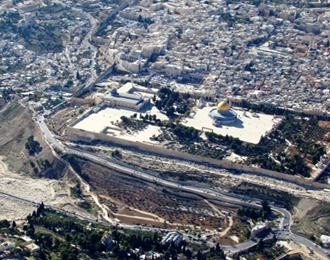