In response to my last weblog I received the following reaction:

After reading your article, “Absurd opposition against the reconciliation of all”, I thought about a few texts from the prophets of the Old Testament. It concerns the end-time prophecies like Malachi 4:1

“For behold, the day is coming, consuming like a stove, and all the arrogant and all doing wickedness become stubble. And the coming day will set  them aflame, says Yahweh of hosts, WHICH SHALL NOT LEAVE TO THEM ROOT OR BOUGH”.

“For near is the day of Yahweh over all the nations. Just as you do, it shall be done to you; Your dealing, it shall return on your own head. For just as you drink on My holy mountain, So shall all the nations drink turbid wine, And they will drink and swallow absinth,  AND THEY WILL BECOME AS IF NOT HAVING BECOME”.

The capitalized words in these verses don’t sound like the conscious unbelievers will ever receive the eternal life. At least, that is how they come across to me. But maybe you think differently about this.

The writer of this response brings up an important point. How can one believe that all of Gods enemies will be reconciled to Him if the Scriptures also show us that they will be destroyed and will disappear like burnt stubble? Both can impossibly be true at the same time. The common procedure with such a determination is that one makes a choice and accepts one and tries to reason away the other or vice versa.

But that is not how we treat the Scriptures. One should believe on all which the Scriptures speak of (Luke 24:25).  The travelers to Emmaus once had the idea that when the Messiah would come, He would rescue them from their enemies (Luke 24:21). That was totally justly, because that is what the prophets teach explicitly. But in their worldview a suffering and dying Messiah didn’t fit. While the Scriptures foretold this just as well. So what these people needed was education about how both the one and the other is true. That Christ had to suffer first and subsequently would be entering into His glory (Luke 24:26). When the Scriptures present both as a fact than it is not or/or but and/and. Placed in the right order, both facts are complementary.

Likewise it is with the Scripture verses brought forward by the writer of the response. Both Malachi 4:1 and Obadiah: 15,16 speak about “the day of the Lord”. That is the time period in which Christ establishes His kingdom on earth. He will make short work of the nations that oppose His kingdom. In many places we read about the unprecedented slaughter that will take place. About the “trough of the fury of God” which will be trodden (Rev 14:19,20). The wicked will be killed and thereby abolished. Because that is what death is: nonexistence (Job 7:21, 10:18,19; Ps. 39:14). Theologians call this annihilation (=abolishment > nihil = nothing).

Does the fact that these people will perish “and burnt as stubble”, that their story doesn’t have a sequel? No way! Because God vivifies the dead i.e. He calls what is not as if it were (Rom 4:17). The perished in “the day of the LORD” will rise for sure. After a thousand years in which Satan was bound they will be raised at “The great white throne” to be judged. The judgement in which they previously perished was a judgement of nations. The judgement at the “great white throne” however, is an individual judgement in which their earthly life is viewed and judged from Gods perspective. The ones who are not “written in the book of life” will die “a second death”. In fact, for them this judgement at “the great white throne” is an interruption of their state of death. They were dead and after the judgement they will die again so a “second death”. The will not be present when Christ continues to reign after “the great white throne” from a city that comes down from the heavens (Rev. 21:8, 22:5).

Death will be abolished

Does this mean ‘end of story’? No it does not. Christs’ reign is not Gods end goal, but the road towards this end goal. Because Christ must be reigning until.. Death, as the last enemy, is abolished (1Kor 15:26). Pay attention: during his reign Christ abolishes his enemies by means of death. But at the end of his reign he will abolish death itself by vivifying His former enemies! Death then is dead. There will only be LIFE!

The scaffolds are taken down

The function of death can be compared the scaffolds for the construction of a house. Once the construction of the house has finished, the scaffolds are taken down so the house can be transferred to the owner to be inhabited. So death fulfills an important function during the construction of the Kingdom to subject all to God. However, when all is subjected, all that is left to do is to abolish death i.e. all that are still dead will be vivified. The scaffolds are taken down, so to speak, and a perfect Kingdom in which all has been subjected to God and in which no one is missing, will be transferred to God, the Father, who will become “All in All” from then on (1Kor: 22-28). 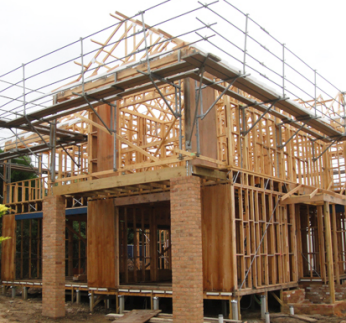