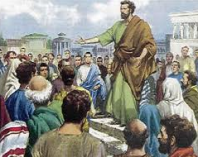 Francis Chan argues in chapter 4 of his book, “Erasing Hell,” that hell was an important motif in the preaching of the apostles. Chan begins with a remarkable statement:

First of all, we will immerse ourselves in Paul’s vision of hell. The first thing to notice is that nowhere did he use the word itself. Isn’t that remarkable? Nowhere in his thirteen letters has he used the word “hell”.

For the record: the word “hell” is not used anywhere in the NT. Jesus spoke of Gehenna twelve times and was referring to a valley near Jerusalem where, during the Messianic kingdom, carcasses of rebels will lie in the open. In his preaching to Israel, he referred to it, with a view to the coming of the Kingdom. When the people rejected their Messiah and Paul, for this reason was called to go to the nations, Gehenna, literally and figuratively, was not a meaningful nor applicable part of Paul’s message. painful operation Nevertheless, Paul in his letters speaks ever so realistically about trial and judgement. “God will repay each one according to his work”, he wrote to the Romans (2:6). “Tribulation and anguish will come upon every human soul who does evil” (Rom.2:9). But please note: Divine sentencing never stands in the dark perspective of endless damnation. On the contrary, salvation (1Tim.2:4; 4:10), justification (Rom.3:23,24; 5:18) and quickening (1Cor.15:22) of every human being is, in advance, guaranteed by Paul! Precisely for this purpose, will as yet, painful procedures take place. Judgment in the Bible is always corrective. Take that perspective away, and God turns into a demon of wrath and torture, without end. A threatening sermon on Mars Hill? Chan writes:

Like most of you, it annoys me when I hear a street preacher present a story of hell and damnation (…) But the best navigators line the shore, because, at the same time, I must admit that the speech of Paul in Acts 17, very much, resembles a threatening sermon.

What a serious misconception! Paul speaks, at the Areopagus in Athens, about the one GOD Who “made the world and all that is in it” and “gives to all, life and breath and all things“. He “is not far from each one of us, because in Him we live, and move and have our being”. While Paul emphatically presents these things, he calls his audience to reflect. “Repentance” is what most of the translations read, but the Greek word that Paul uses (metanoia) literally means, ‘re-think’, ‘re-consider’ and hence, ‘reflect’. Why? Paul explains:

…forasmuch as He assigns a day in which He is about to be judging the inhabited earth in righteousness by the Man Whom He specifies, tendering faith to all, raising Him from among the dead — ” Acts 17:31

Does Paul, here, speak about hell and damnation or about something that is “very much like a threatening sermon,” as Chan claims? With hell and damnation-glasses on, he cannot escape such associated thoughts. But when we take those glasses off, it is evident that also in this text Paul is proclaiming Good News! We hear in his words the echo of Psalm 96:

Let the heavens rejoice, let the earth exult, Let the sea thunder and its fullness, Let the field be joyous, and all that is in it; Then all the trees of the wildwood shall be jubilant Before Yahweh, for He comes; For He comes to judge the earth; He shall judge the habitance in righteousness, And the peoples in His truth. Psalm 96:11-13

In what respect a  threatening sermon and hell and damnation? It is a cause for joy to know that God will put all things right and bring about the right outcome. For He is faithful. How ever painful His operations may be, God always has the salvation of His creatures in view.  giving faith to all One more thing. The KJV reads: “He hath given assurance unto all [men], in that He hath raised Him from the dead.” Literally it says here: tendering faith (=aorist, without horizon) to all (Acts 17:31b). The verb (Gr. parecho) here, is in Acts 16:16 translated as “brought”, as well as in 19:24. Realize what that means. God provides, delivers, brings faith to all! For this He raised Jesus Christ from the dead, so that every tongue shall confess, to the glory of God the Father, that Jesus is Lord. Bright rays of grace shone from Paul’s message on the Areopagus! Woe to anyone who makes this into a threatening sermon of hell and damnation. next ——————————— translation: Peter Feddema