For the word of the cross is stupidity, indeed to those who are perishing, yet to us, who are being saved it is the power of God.

“The word of the cross” is the word concerning the crucified Christ (:23). In the meantime he has indeed been raised from the dead and is in glory with God. But Paul’s evangel began with the cross. A wooden pole to which someone was nailed. An emblem of a horrible execution served as the logo of Paul’s message of victory. The cross symbolizes the rejection of the political and religious world. Whoever puts his trust in it makes a fool of himself in the eyes of the world.

Today, GOD is giving a word of triumph to the world through a symbol of ultimate humiliation. That is God’s way of working. A completely ridiculous instrument must serve as means to salvation. In Noah’s day that was a wooden ship on dry land. For Moses a rush basket. For Samson it was a withered donkey’s jawbone. In David’s fight against Goliath, it was a slingshot with a little stone. And so on.

Also the word that GOD sends out today is not popular or ‘sexy’. It is despicable ‘by design’. But precisely in this way GOD collects an ecclesia to himself. Behold GOD’s power and wisdom! 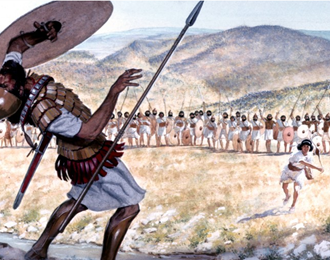