Absolutely, it is heard that there is prostitution among you, and such prostitution (which is not even named among the nations), so that someone has his father’s wife. And you are puffed up, and mourn not rather…

Paul starts a new topic. Although, it results from the foregoing. The Corinthians were ‘puffed up’ (4: 19; 5: 2) and wanted status in the world. So, they did: they even were the champions! They got fame because prostitution was accepted among them, even more than among the nations.

In the Scripture ‘prostitution’ is a collective name of all sexual intercourse (“to be one flesh”), what isn’t between “a man and his wife” (Genesis 2: 24). Even under the nations, where ‘prostitution’ is quite normal (think about adultery and homosex), it was not done that a man had a relation with his father’s wife.

Paul doesn’t question the man of this fault relationship. For, not his behaviour was the problem, but the attitude of the Corinthians! They were ‘puffed up’ and proud of their tolerance.  Yes, they had a waving flag, but not the one of the Evangel… 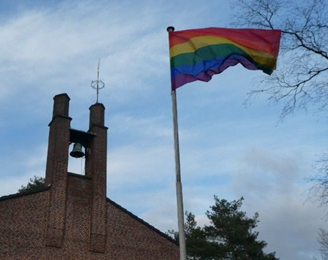