As long as people die and even as long as there are still people in death, death has not been nullified and swallowed up. And yet, death has indeed been overcome since the Firstfruits left the grave empty forever. Although death itself has not yet been nullified, the sting is already out. The painful, sharp point has already been removed.

What Paul is referring to as “the sting of death”, we do not have to fantasize about. After all, he writes: “the sting of death is sin“. We would be wise to understand this word ‘sin’ literally: ‘missing the mark’. Death is painful and fatal because it makes our entire existence meaningless and vain. The whole book ‘Ecclesiastes’ is about that theme. Everything is vanity and chasing after wind because it ends in death. Death foils our existence like a gray veil.

But now, two thousand years ago, death was overcome. Since then, the sting is out. What else can death do to us? Her head is crushed, what we see are convulsions. 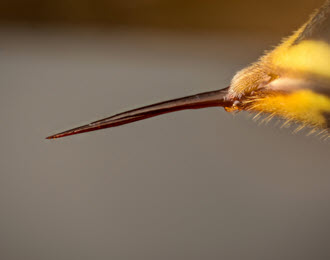