thereafter the consummation, whenever He may be giving up the kingdom to His God and Father, whenever He should be nullifying all sovereignty and all authority and power.

Christ’s rousing and resurrection was D-Day – the decisive day! Then death was conquered. The firstling definitively left death behind. The second milestone in this triumphal procession is the vivification of those who are Christ’s in his parousia. But V-Day, the day of victory, comes when all the dead are made alive. ALIVE with capital letters. Every government, authority and power has become redundant because there will be no more enmity or opposition. Hence, Christ will then surrender a perfect kingdom to his God and Father.

Notice again that Paul here looks beyond the resurrection at the great white throne (Rev. 20). Because at that stage much still needs to be put right. Also the death is not canceled, but continued in “the second death”. And Christ’s reign is also continued on “the throne of the Lambkin” in the new Jerusalem that descends from heaven (Rev.21 and 22). What Paul describes in 1 Corinthians 15 lies beyond the horizon of the book ‘Revelation.’ In a glory that surpasses everything! 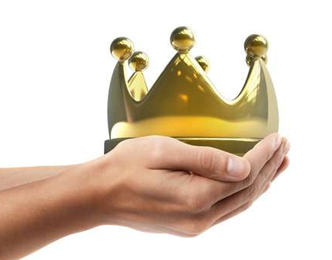