For I accepted from the Lord, what I give over also to you, that the Lord Jesus, in the night in which He was given up, took bread, and giving thanks, breaks it an said “This is My body, broken for your sakes. This do for a recollection of Me”.

What Paul tells about Jesus’ words during his last evening meal, he does not know from tradition, as some translations stubbornly add. Paul knows firsthand: “… I accepted from the Lord.” Indeed, it corresponds to what Matthew, Mark, and especially Luke write about it. But Paul knows more about the meaning of bread. Jesus had not spoken about this on the night he given up, but only later when he revealed himself to Paul from heaven. When he once said “this is my body,” it referred in secret to the one body, the ecclesia (10: 16,17). The Lord revealed this to Paul.

On the night that Jesus was handed over, he celebrated the Passover that God had given exclusively to Israel (Ex.12: 48). Of course they did not celebrate that feast in Corinth, but during their meals they did remember that one Passover in which Jesus had said: this is my body … 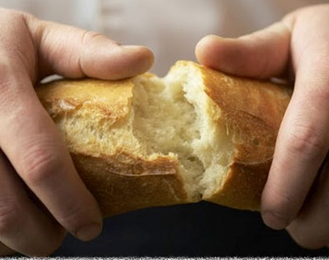