Are Melchizedek and Christ identical? 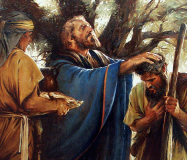 Is Melchizedek an appearance of Christ in the O.T.?

From the words of Hebrews 7:3, such has been wrongly concluded. In this verse we read the following about Melchizedek:

fatherless, motherless, without a genealogy, having neither a beginning of days nor consummation of life, yet picturing the Son of God is remaining a priest to a finality.

From the fact that Melchizedek was made like unto the Son makes it evident, in advance, that both are not the same. Besides, the Son of God had a legitimate father, a mother, a genealogy, a beginning of days and an end of life. So the question remains: what then is the meaning of the words in Heb.7:3? The writer of Hebrews referred to Genesis 14, in which three verses describe the priest and king of Salem. He was a great and noble figure, because he blesses the shepherd-prince, Abram. This shows that Melchizedek was greater that Abram, because…

… beyond all contradiction, the inferior is blessed by the better. -Heb.7:7-

Abram, himself, had recognized this, too, for he gave Melchizedek the tithes of the best of the spoils (Heb.7:4). But how did Abram see in this priest his superior? From whom did Melchizedek receive his priesthood? Who were his parents? From whom was he a descendant according to the genealogy? That are in Judaism very important questions! A priest (cohen) derives his office from his origin. He must be from the tribe of Levi and, more specifically, of the family of Aaron. But Melchizedek’s priesthood is of a very different order, because nothing is mentioned of him in this respect. Imagine: the ancestor of Aaron and Levi (Abram) bowing down for a priest of whom nothing is recorded regarding his father, mother or genealogy! Also, nothing is said about his birth or his death, and nowhere is any reference given concerning a transfer of his priesthood. And precisely in all of this, he is like unto the “the Son of God”. Melchizedek did not receive his priesthood from his parents nor was it transferred, because of his death. That is, the Scripture does not speak about it and that precisely is typical for its meaning! For Christ is not a Priest according to His genealogy.

… it is taken for granted that our Lord has risen out of Judah, to which tribe Moses speaks nothing concerning priests, -Heb.7:14-

On earth, and before his death, Jesus explicitly was not a priest.

Indeed, then, if He were on earth He would not even be a priest, there being those who offer approach presents according to the law -Heb.8:4-

Jesus Christ has become a Priest, so that He could enter into the heavenly sanctuary.

… entering into the interior beyond the curtain, where the Forerunner, Jesus, entered for our sakes, becoming Chief Priest according to the order of Melchizedek for the eon. -Heb.6:19,20-

In other words, before His death, Jesus could not be a priest, but in order to be able to go into the heavenly sanctuary, He had to be a priest. Conclusion: He has become a priest since He rose from the dead…

Please note that here, too, the Son of God is “in the likeness of Melchizedek”. Not identical to him, but a likeness of him.