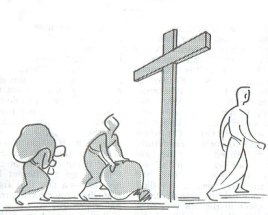 In Romans 5, Paul explains, by means of comparison, how Christ overcomes sin and death in the world. Through one act of disobedience, by one man, sin and death entered into the (human) world (5:12). Parallel with this is the one act of obedience of one man, replacing sin and death with justification and life. And in both cases, negative and positive, the impact of that one act is universal and includes all mankind (5:18). By eating the forbidden fruit, all of humanity was condemned to be sinners and mortals. But through Christ’s obedience, even to the death of the cross, that same humanity will be allotted justification and life (see also 3:23.24). That, in a nutshell, is the Evangel of God’s grace! Grace that, by definition, transcends sin and thus also death (5:20). In Romans 6, Paul raises the question whether this truth is not an argument to continue with sin. After all, that way, grace would surely increase (6:1)? The latter may be so, but Paul shows how illogical that kind of reasoning is. Anyone who through faith is “in Christ Jesus”, has become one and identified with Him (6:3,5). God sees us in Him. Justified! In everything identified with Him. Christ died – and we with Him (6:6). Christ was buried – and we with Him (6:4). Christ was resurrected – and we with Him (6:5). Later on, in his letters, Paul explains about additional details and writes that, with Christ, we are set amongst the celestials (Eph.2:6; Col.3:1). And in due time, we will appear with Him in glory (Col.3:4). In other words, His position and glory, He shares with those who believe in Him and are part of the ecclesia, which is His body. In Romans 6, Paul writes that Christ not only died for our benefit, but that we also died with Him. But if Christ once for all died for sin (6:10) – and we with him, how illogical it is to continue in sin! Being one with Christ and identified with Him, we may walk as having been roused from among the dead (6:13) into a new life in which sin is left behind (6:4). Succinctly, Paul describes the consequences in Romans 6:11 (literally translated):

…be reckoning yourselves to be dead, indeed, to Sin, yet living to God in Christ Jesus, our Lord.

Sin is not dead, but we are as dead people in relation to sin. So does God see us (in Christ); not reckoning with sin, which means: ignoring it altogether. That is the opposite of (as is commonly taught) fighting against sin, or trying not to sin. Whoever is doing that, is constantly fixated on sin and dominated by sin. That is considerably more tragic even than the average unbeliever, because he has no problems with sin. Notice what Paul writes in Romans 6:14:

For Sin shall not be lording it over you, for you are not under law, but under grace.

This does not say that sin is your lord when you are without law, but it is your lord, when you are under the law. Whoever positions himself under the law (“thou shalt not …”) is dominated by sin (Rom.7:7,8). Romans 7 shows how sad such an existence is (7:22-24). Indeed religious, but constantly failing, or missing the mark and thus, sinning. Walking in newness of life (6:4) does not mean trying not to sin. In that case you are (still) dominated by sin and you are focused on it. No, walking in newness of life means to be aware of your position in Christ Jesus. Acquitted and justified! Complete in Him. Instead of dealing with sin, we live “for the God” (6:11). “The GOD”, that is the One Who can do everything and provides everything we need. He gives us ample reason to give thanks. That is a walk “under grace” and a Life, with a capital L!