Which belief counts for God?


In Romans 4 Paul gives a detailed explanation of the Scripture in Genesis 15:6. In Genesis 15 we read that Abram established that he and his wife Sarah were still childless after decades of marriage. In the meantime they had reached an age and (humanly speaking) all hopes of offspring had been lost. And then it is God who calls him outside in the night and makes him look at the stars in the sky. Thus (uncountable) would his seed become, God assures him. And then we read the words:

Now Abram believed on Elohim and He reckoned it to him for righteousness.

Nothing was asked of Abraham. No condition was made. The promise was given to Abram without any consideration. If Abram wouldn’t have believed this promise, it would not change God’s obligation to fulfil his word to Abram. After all, promise is a promise. It is for this reason that Paul argues in Romans 4:

Yet to him who is not working, yet is believing on Him Who is justifying the irreverent, his faith is reckoned for righteousness.

God justifies the irreverent – why?

What does it mean: “Him who justifies the irreverent”? In the previous chapters, Paul had shown that all people are sinners. Nobody excepted. Romans 3:

11 No one is understanding. Not one is seeking out God. 12 ”All avoid Him: at the same time they were useless. Not one is doing kindness: there is not even one!”

In other words: “the irreverent” could be substituted by every human. No one is excepted. Listen to Paul in Romans 3:

23 For all sinned and are wanting of the glory of God. 24 Being justified gratuitously in His grace, through the deliverance which is in Christ Jesus…

All sinned. All are wanting of the glory of God. And all are justified. Gratuitously and in Grace. That is what is written here! God really justifies the irreverent. Because no one is excluded!

In Romans 5, Paul continues his argument and shows that the position of every mortal man is fixed our collective ancestor Adam. A man is condemned to be a sinner and a mortal because he is an Adamite. That is not a choice that is given to a human. It is a fact that is already fixed at birth. And then Paul finally draws his conclusion in Romans 5:18. In telegram style. The verse does not even contain a verb in Greek. It looks like a mathematical equation.

By one mistake of Adam all people are condemned to sin and death. Now Paul says, there is also, through one just award, that is, one act of obedience (:19) justification (and life ; 1 Kor. 15:22) for all mankind. The condemnation, by one mistake is not optional. No human is asked whether he or she chooses to become a sinner or mortal. No, it is an inescapable fact. For all people. Now, would the one act of obedience of Jesus Christ yield less? So truly condemnation for all people, but no real justification for all people? In that case, however, the comparison in Romans 5:18 would be completely flawed. Then the actual effect of Adam’s misstep would be much greater than that of  Christ’s obedience. While Paul, argues in this section that the grace in Christ is “much more” (:15,17) than Adam’s misstep.

It is not about how or when all people receive justification of life. This is what Paul discusses in, among others, 1 Corinthians 15:22-28. It is about the fact that God justifies the irreverent which means all people. The truth of the Gospel is, that as inevitable as sin and death are for every human, so justification and life are equally inevitable. That is not an offer or choice. It is a statement. An evangel! Any human contribution excluded. God justifies the irreverent! And believing this is counted as righteousness. 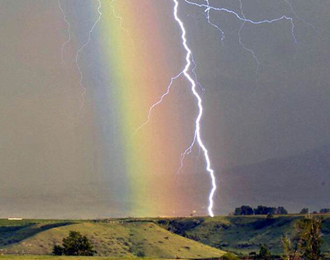