| Blog English | When does the day of the Lord begin?

When does the day of the Lord begin?


A number of good answers are possible in reply to the above posted question. However, when does the day begin … for whom? Even as in America a given day begins at least eight hours later than it has began in Europe, even so “the day of the Lord” begins for Israel later than for the ecclesia, the body of Christ. Today, I will limit my comments with respect to it beginning for Israel. The prophet Joel wrote that the day of the LORD will begin after particular signs would occur in the sun and the moon.

The sun shall be turned to darkness, and the moon to blood, BEFORE the coming of the day of Yahweh, the great and fearful day. Joel 2:31

The signs in the sun and moon, of which Joel speaks, we can find in a number of places in the words of prophecy. See, e.g. Isa.24:23; Rev.6:12. These signs signal the appearing of “the Son of Mankind” (the Ben Adam) to Israel, after the great affliction in the land. Jesus spoke about them in His second ‘sermon on the mount’:

:29 Now immediately AFTER THE AFFLICTION of those days the sun shall be darkened and the moon shall not be giving her beams, and the stars shall be falling from heaven, and the powers of the heavens shall be shaken. :30 And then shall appear the sign of the Son of Mankind in heaven, and then all the tribes of the land shall grieve, and they shall see the Son of Mankind coming on the clouds of heaven with power and much glory. :31 “And He shall be dispatching His messengers with a loud sounding trumpet, and they shall be assembling His chosen from the four winds, from the extremities of the heavens to their extremities. Matthew 24

For Israel the day of the Lord will begin AFTER the affliction and AFTER the darkening of the sun and the moon and after other awe-inspiring signs in the heavens. Immediately after these occurrences, the Messiah will appear to “the tribes of the land” and will bring back the chosen people from every corner of earth to the promised land. That will be the beginning of the day of the Lord for Israel. However, for the present-day ecclesia, “the day” will begin earlier. More about that the next day. 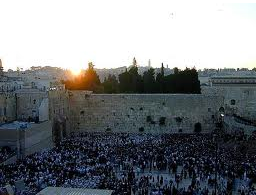 The day dawns for Jerusalem. From the Mount of Olives in the east shall arise the Son of righteousness.