| Blog English | what is meant by ‘baptizing for the dead’

what is meant by ‘baptizing for the dead’


This expression is obtained from what Paul wrote in 1 Corinthians 15:29.

The way in which the vast majority of Bible translations show this text makes the content rather enigmatic. And that turns out to be an excellent breeding ground for the most fantastic explanations. Just think of the Mormons, who, on the basis of this text, conduct massive baptism-services for already deceased people. They are famous for their possession of a fabulous amount of genealogies (“endless genealogies” 1Tim.1:4) with the intention of being able to register baptisms for the dead. Recently, this was in the news, when it became known that some deceased persons of the Dutch royal family were, posthumously, baptized by them. However, it is surprising that the difficulties, which this verse invariably causes, entirely disappear by moving the punctuation marks. You should know that punctuation (= the placement of punctuation marks), per definition, is the work of translators, because in the original text all letters are placed next to each other, without commas and periods, even without spaces between the words. That makes 1 Corinthians 15:29, in this case, difficult to understand. Below, you can see a interlinear of this verse (ISA):

The rendering in the Concordant Version of Scripture is as follows:

Else what shall those be doing who are baptizing? It is for the sake of the dead absolutely if the dead are not being roused. Why are they baptizing also for their sake?

This view is not only in harmony with the original text, but it also appears to fit perfectly in the context of Paul’s argument. In this chapter, he refutes the assertion of some in Corinth who said that there is no resurrection of the dead. Paul shows, extensively, the absurdity of that view and refers, in context, to the practice of baptizing. Although Paul wrote earlier in this letter:

For Christ does not commission me to be baptizing, but to be bringing the evangel… 1Corinthians 1:17

But that does not take away that whosoever is baptized does this with a view to the resurrection. Because the idea behind the water baptism is that one goes into the water (grave) and consequently rises again (cp. 1Petr.3:21). Would there be no resurrection, then one baptizes himself for… the dead! Ever so pointless. “Baptizing for the dead” was not a “recognized practice in the early Christian church”, as one usually thinks, but indicates a baptismal-practice that has been robbed of its meaning (resurrection). 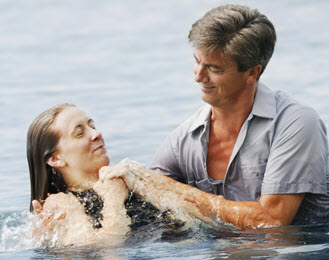