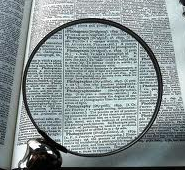 The word typology is not in the Bible. The word type (Gr. tupos) does. So is Adam called a type of Him who would come, “the last Adam” (Rom.5:14). And the events that befell Israel in the wilderness are said to be types of us, who believe. Typology is the study of such types. A type is an image or example. Before Moses built the tabernacle, God showed him a type of it, on the mountain (Heb.8:5). The study of types in the Bible is exceptionally interesting. Recognizing types, gives to the Scriptures a wonderful, mutual relationship. That is why “the Scriptures,” together, are spoken of as “Scripture”, i.e., they form a unity that cannot be broken (John 10:35). One Bible book refers to another Bible book, to which it, on the surface of things, does not have a connection. One example, into which I recently took a deeper look, during my presentation on 2 Kings 2, was about a group of forty-two youths who mocked Elisha and then were scattered about by two she bears. The violent scene pictures a marvelous parallel with the last book of the Bible, where two Beasts (the one had legs like a bear), will trample under foot the holy city for forty-two months. It is not a game to listen to the Scripture, this way, and to look beneath the surface. On the contrary. Paul blames the Galatians that they did not really listen to the law.

Tell me, you who want to be under law, are you not hearing the law? Galatians 4:21

And then Paul shows that the history of the struggle between Sarah and Hagar stands for two covenants (4:25). One for works and slavery (Sinai) and the other for the promise and freedom. If the Galatians would have listened to the law, this would not have escaped them. The letters in “the New Testament”‘ are full of entries of types. Eve, taken from the body of Adam refers according to Paul, to the ecclesia, the body of Christ (Ephesians 5:31,32). The letter to the Hebrews is almost, from the beginning to the end, based on instruction in types from the Hebrew Bible. The letter even speaks of shadows (10:1). The tabernacle as tent, its many associated attributes, the sacrifices, the priests, the sabbath, etc., refer, one by one, to what and to Whom was to come. And what about a figure like Melchizedek, of whom we have only three verses (Gen.14:18-20) of historical information? Genesis tells very little about him, but is it not amazing how the writer of the Hebrew letter, nevertheless, elaborates on his meaning?! He not only details about what is communicated concerning him, but even the missing information, evidently, has meaning! The fact that of the priest Melchizedek no lineage, genealogy, age or death is listed, according to Hebrews 7:3, is typical! These refer to the resurrected Christ, Who is Priest “after the order of Melchizedek” (7:15,16). I do not, here, give these examples to further explain these types, themselves. I mention them only to show us that Scripture, itself, is abundant in the use of types. And how in this, Scripture also encourages us to sensibly and doubly sensibly listen to her.