I received a question of somebody, who wondered about the excessive violence, which is mentioned in Mathew 24 vs 51 (see also Luke 12:46). There we read a parable of a slave who, when his Lord is delayed, starts beating his fellow slaves and misbehaves with the drunkards. When his Lord unexpectedly returns, he will…

… torture him and appointing his part with the hypocrites.

This is how the Dutch NBG51-translation views it. Other Dutch translation can be ruder: ‘chop in pieces’, ‘dismemberment’ or ‘beheading’. The oldest translation ‘Statenvertaling’ is the mildest and speaks of ‘separation’. But why those rather various views? And which one is correct?

The Greek word, that is used here, is ‘dichomoteo’ and it’s composed of the words ‘two’ and ‘cut’. Most translations take it literally and physically, thus ‘chop in two pieces’. The views ‘torture’ and ‘dismemberment’ are less literal, but also in that case ‘dichomoteo’ is taken physically.

Our word dichotomy is also directly related to this Bible passage. It’s used in diverse scientific disciplines. For example in anthropology and theology in which one speaks about the dichotomy of a human in body and mind. The concept always has an abstract application of a separation or distinction. The view of the ‘Statenvertaling’ (separation), is in accordance with that. Also in the context of Matthew 25:51 this meaning is much more credible. Of course, a slave who misbehaved is not cut in two, he is separated, i.e. there will be separation between him and the other slaves.

Summarized: in the context of Mathew 25:51 the figurative ‘separation’ has much more sense than the literal. As the Word of God is a double-edged sword and separates soul and spirit, sentiments and thoughts (Hebrews 4:12). 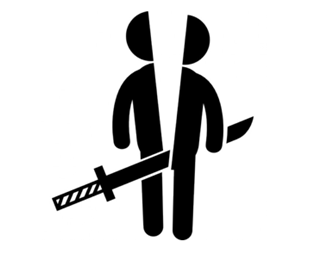