The wrath of God appeased? (Chan 3) 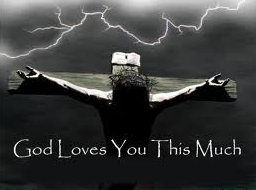 On this Good Friday (coincidentally also the 14th of Nisan on the Hebrew calendar), I will, in this third part of my review of “Erasing Hell” by Francis Chan, discuss a matching quotation. It deals with the meaning of the cross of Golgotha and aptly illustrates how the doctrine of hell, influences the whole vision on Scripture, including the reason why Jesus had to die on the cross. Chan writes:

inconsistencies Here, it is suggested: the cross of Golgotha was intended to appease the wrath of God about our sins. When someone rejects this cross, then he will for ever have to bear that wrath, himself. Such a suggestion raises complex questions, like: how can God punish the same sins twice? But also: how could the wrath that Jesus endured for so many people, at once, be temporary, while the same wrath in hell, will be imposed on countless individuals, without end? wrath of God? However, the inconsistencies in this theological concept is not the biggest problem. It is located in the idea behind it. Nowhere in the Bible do we read that Jesus, on the cross, endured the wrath, the punishment or the judgment of God, for our sins. Certainly, Jesus “bore our sins, in His body, on the tree” (1). It were, after all, the sins of humanity that nailed the innocent “Lamb of God” to the cross. He died through our sins. Jesus did bear the punishment, that is true (3). However, not the punishment from God, but from the people, as it was expressed and administered in accord with the sentence that Pilate imposed on Him. Furthermore, Jesus also died “for our sins” (2). For through death and resurrection, life is brought to light, where our sins forever belong to the past. How ever much theology is permeated with the thought that Jesus, on the cross, encountered and bore the wrath of God due to our sins, such is unknown in Scripture. Indeed, this idea obscures the true meaning of Golgotha, namely, that of reconciliation (4). is God conciliated? Here again, not, as e.g., Calvin taught, that God had to be conciliated (5), as if God was hostile and estranged from humanity. What a caricature! It is the world that is hostile and estranged, while God, precisely by means of the cross, makes peace. When the world nailed the Son of God to the cross, God’s response was shown three days later: LIFE for all those who die in Adam (6)! The murder of His Son did not alter God’s love for this world. the world reconciled! It was not God Who was being conciliated through the cross. It was not His wrath that had to be appeased. The cross demonstrates the enmity and anger of the world. And God? He is not reckoning the world’s offences against her and so He conciliates the world with himself (7). This is exactly the reverse! The cross is God’s means to undo all enmity and estrangement on the part of man and celestial beings. Through the cross, God demonstrates His undeniable and unchanging love that surpasses every degree of enmity. God reconciles all to Himself through the blood of the cross, whether those on the earth or those in the heavens, as Paul writes in Colossians 1:20. LOVE WINS!!!! —————— footnotes(1) 1Pet.2:24 (2) 1Cor.15:3 (3) Isa.53:5 (4) See: ‘what is reconciliation?’ (5) Calvin’s Institutes (II, Ch.16): “God has been to man an enemy… God the Father is through His (=Christ) sacrifice satisfied and reconciled; His wrath has been appeased by this Intercessor”. (6) 1Cor.15:22 (7) Rom.5:10; 2Cor.5:19 next  ——————————— translation: Peter Feddema