| Blog English |  the spirit, the water and the blood

the spirit, the water and the blood 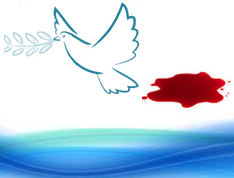 Earlier this week after I had placed my blog about the non-original words in 1 John 5:7, I received the following reaction from a reader:

Regarding the “Comma Johanneum”, I must say that, (despite the fact that it is an addition) it still is quite true and that I agree completely. Of course, God (the Father), His Word and His Spirit are one in their testimony (what is it about here), as it was at the creation in efficacy… etc. Jesus (the Word Incarnate.) said, I and the Father are one . Of course! That I would like to say to the Chr. Reformed sister (especially the latter, for two reasons).

A strong point is inserted here. Even if the added words of 1John 5:7 would be authentic, then that still does not make the doctrine of the trinity true. The Father, the Word and the Spirit are one in their testimony. You need not be a trinitarian (= supporter of the Trinity doctrine) to endorse that. Let us take a closer look at this passage in 1 John 5, but without the added words:

What does John mean when he writes about the testimony of “the spirit and the water and the blood”? John presents these three as a testimony of God concerning His Son. Let’s examine them one by one. At the start of Jesus’ ministry, we read about his baptism “in water” and the role of the spirit of God in it. In Matthew 3, it is described as follows:

16 Now, being baptized, Jesus straightway stepped up from the water, and lo! opened up to Him were the heavens, and He perceived the spirit of God descending as if a dove, and coming on Him. 17 And lo! a voice out of the heavens, saying, “This is My Son, the Beloved, in Whom I delight.

Jesus rose from the water of the Jordan River, which is a beautiful picture of the resurrection! Then the spirit of God descended upon Him in the form of a dove and from out of heaven were heard the words “this is my Son …”. God Himself testifies concerning the one being baptized in water. And the Spirit descending on Him confirms this. It is Jesus’ anointing (see Acts 10:38). I.e. He became the Messiah, or the Christ. Receiving the spirit in the Jordan was a type of what, a few years later, definitively would happen, when He once, for all times, rose from the grave. John the Baptist declares right after it:

And I have seen and have testified that This One is the Son of God. -John 1:34-

The third witness which John presents in 1Joh.5:6 and 7 is “the blood.” The spirit and the water point to the beginning of Jesus’ ministry, the blood obviously refers to the end of it. The blood refers to Jesus’ slaughter, that as a phrase is well-known, but certainly not its meaning. Unfortunately, almost all Bible translations omit recording the following, bold part of Matthew 27:49:

49 Yet the rest said, “Let be! We may see if Elijah is coming, and saving him.” Now another, getting a lance head, pierces His side, and out came water and blood. 50 Now Jesus, again crying with a loud voice, lets out the spirit

According to the majority of ancient manuscripts, Matthew explains, here, that Jesus died, because a spear was stabbed in his side. According to Matthew, Jesus was literally slaughtered, i.e. slain by exsanguination (= loss of blood). That also explains why already, at such an early stage, Jesus did die. A fact which also surprised Pilate (Mark 15:44). That almost no one knows the cause of Jesus’ death is due to a misleading translation of John 19:34.

31 The Jews therefore, because it was the preparation, that the bodies should not remain upon the cross on the sabbath day, (for that sabbath day was an high day,) besought Pilate that their legs might be broken, and [that] they might be taken away. 32 Then came the soldiers, and brake the legs of the first, and of the other which was crucified with him. 33 But when they came to Jesus, and saw that he was dead already, they brake not his legs: 34 But one of the soldiers with a spear pierced his side, and forthwith came there out blood and water.

Do we follow the above rendering of these texts, then Jesus was stabbed after He was already dead. But this raises three, big questions:

These questions are solved, at once, if we do not take verse 34 as a consecutive act, but as a reason-giving fact, as to why Jesus had already died. The verb in John 19:34 (aorist) also points in this direction: it is not a thing of the past, but an unspecified fact. Concordantly translated, we read:

32 The soldiers, then, came and fractured indeed the legs of the first and of the other who is crucified together with Him. 33 Yet, coming on to Jesus, as they perceived He had already died, they do not fracture His legs. 34 But one of the soldiers pierces His side with a lance head, and straightway out came blood and water. 35 And he who has seen has testified, and true is his testimony. And he is aware that he is telling the truth, that you, also, should be believing. 36 For these things occurred that the scripture may be fulfilled, “A bone of it shall not be crushed.”

John, the evangelist, stood with them, when Jesus was fatally stabbed. It was the 14-th of Nisan, the climactic day on which the Passover lamb would be slaughtered, without this causing any of its bones to be broken. And that is exactly of which John was an eyewitness: a slaughtering, without one bone being broken. Here, the Scripture was fulfilled regarding the Passover! The blood proved that Jesus Christ is the true Passover (1Cor.5:7). Three unanimous witnesses, the spirit, the water and the blood. They unmistakably testify that Jesus Christ is the Son of God!