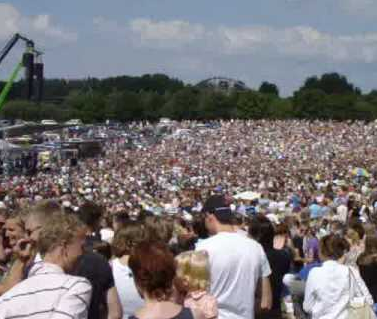 For already more than forty times, once again this year, on the Pentecost weekend, a Revival Conference takes place in Biddingshuizen, the Netherlands. This morning, Reverend Ron van der Spoel spoke on the theme “praying together”. During the meeting, he called on the 13,000 attendees to pray passionately for the Netherlands. I quote:

What can we ask? What is it that breaks God’s heart? That of the 16 million people living in the Netherlands, 75% of them do not know the Lord Jesus as their Saviour and Redeemer! People, that can not be! We can sit here pleasantly together, but this is unacceptable when we know that three quarters of the  Netherlands’ population goes to hell, if Jesus should come back, now!

Do you know what is really tragic? That a celebrated preacher on such a big stage, presents to his listeners an ‘evangel’ that is not an Evangel. If it were true that 75% of all the Dutch people would go forever to hell, then these 13,000 people have not the slightest reason to attend and celebrate a festive gathering, this weekend in Biddingshuizen. Is it not downright horrible what they expect for most of their fellow countrymen? All those joyful songs they sing, with or without raised hands, do not change anything. They only mask it. The truth is that the Bible knows of no ‘hell’. Scripture does speaks of judgments, that’s true. Among other things, about Gehenna, quite wrongly translated as “hell”. Any decent, Bible handbook will tell you that Gehenna does not mean ‘hell’, but is the Valley of Hinnom, near Jerusalem. Judgment never has the last word in Scripture, for GOD does not forsake the works of His hands. Anyone who maintains something else, simply does not know Him. The Evangel is the announcement that Christ Jesus gave Himself a ransom for all (1Tim.2:6). Every human being is, therefore, the precious possession of Christ Jesus. He is Lord of all (Rom.10:12)! That is because God wants all men to be saved and to come to a realization of the truth (1Tim.2:4). And since He is GOD, He also, actually, IS a Saviour of all men (1Tim.4:10). Not according to the preachers on the stage of “Revival”, but according to the Evangel that Paul, as an apostle and teacher of the nations, as a herald announced (1Tim.2:7). Pass it on! For how would people be able to believe it, if it is not told them?