| Blog English | the end of the world?

the end of the world? 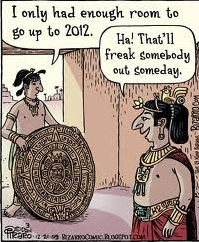 More than ever, people currently speculate about the end of the world. Many years ago, already, based on the end of the Mayan calendar, some predicted that December 21, 2012 will become a special day. Will it be the beginning of a New Age? Or merely a world-shaking event? Or maybe even the end of the world? Business-like people naturally shrug-off such speculation. But apart from this (suspected) hoax, the “end-time-sentiment” is much broader and deeper within Christianity and Judaism, but also within Islam. In all three of these religions, this awareness (among others) is strongly related to the tensions in the Middle East, centered around the Jewish state and, in particular, the city of Jerusalem. It is difficult for Christians, Jews and Muslims to avoid connecting the developments in the Middle East, one way or another, with the expected arrival of, respectively, the Christ, the Mashiach or the Mahdi. How that is to be realized is not now my purpose of writing, because in this blog I wish to address the concern of the broad presumption that we are at a turning point in history. Also in the non-religious world there are enough experts, who, on other grounds (environment, world politics, population growth, technological developments) have reached similar conclusions. Today I read an account of a meeting of Christians in which a pastor expressed his hesitation to mention dates (years) with respect to the return of Christ. That reluctance is understandable. If only because so far, hundreds of predictions in this regard have been overtaken by non-events. Often times, great is the feeling of deception that remains with those who had put all their cards on a fixed date. But the reluctance of the pastor may also be a bland platitude.

Of course, I’m interested in the return of Christ. It’s the headlines of the New Testament: Jesus is coming back! But at the same time, there is Peter, who said: “one day is with the Lord as a thousand years, and a thousand years as one day”.

The minister inferred, according to the context: you should not try to figure out the time. But, it apparently escapes him that Peter’s remark (2Pet.3:8) are precisely given to be aware of the times! When we take it that Jesus ascended to heaven in (or around) the year 30 AD, it is the year 2030, in light of Peter’s words, a milestone, by which, for the Lord, exactly two days have passed. And whoever knows the prophets, is that time-period definitely not without significance. After all, it was Hosea who cryptically prophesied that the Lord, “AFTER TWO DAYS”, “ON THE THIRD DAY” would return to his people, and Israel would, as it were, rise from the dead (Hos.6:1-3). However one looks at it: this prophecy about the return of the Lord, coupled with Israel’s restoration, contains an explicit timing. Do I want to say with this that His return will take place in 2030? No, not necessarily. The expression “after two days” gives ample room for a later time. But not much. For Hosea mentions along with it that this return will be “like the dawn”, i.e., at the beginning of the (third) day. Let us be sober. We do not give a flip about the hype of 21-12-2012. That will blow over, by itself. But the milestone of Peter’s words, 2030, is rock solid and draws closer, undeniably. It is a benchmark that places the current events and developments in a particularly exciting, but also surprising perspective! See also: exactly 2000 years? after six thousand years…