| Blog English | the ecclesia in Colosse

the ecclesia in Colosse 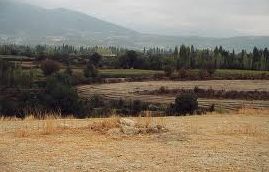 In Rijnsburg, I was privileged to give a series of Bible studies (phrase by phrase) about Paul’s letter to the Colossians. Yet, one more session will complete the study of this epistle. Last Thursday, in connection with the last part of the letter, I did elaborate on the background of the ecclesia in Colosse. In this blog, I like to take another close look at this. It is very intriguing to gain a more concrete picture of how this ecclesia came to be and of the people who were involved in this.

The ecclesia at Colosse was not started by Paul’s preaching (Col.2:1), but by the word of grace which a certain Epaphras had spoken there, in truth (Col.1:6.7). This Epaphras was an acquaintance of Paul, a Colossian and a valued co-worker of the apostle (Col.4:12). Afterwards, he ended up in captivity, together with Paul (Phile.1:23) and struggled greatly in prayer for the ecclesia in Colosse to remain steadfast in the word preached to them (Col.4:12,13), so they would not be drawn away by the threatening influences of vain philosophy and tradition (Col.2:8).

Another well-known name in the ecclesia at Colosse is Onesimus (Col.4:9). Together with Tychicus, he would deliver Paul’s letters to the ecclesias in Colosse and Laodicea (Col.4:7-9; 4:16). Onesimus was a slave of Philemon (Phile.1:16), but ran away or was sent away from him (Phile.1:11). Onesimus came into contact with the imprisoned Paul and became a believer (Phile.1:10). Philemon was already a fellow believer and supporter of Paul (Phile.1:1) along with his housemates Apphia (his wife?) and Archippus (their son?; Phile.1:2; Col.4:17). In Paul’s letter to Philemon, we read how Onesimus, by Paul, was sent back to his old address, along with the request to Philemon to receive him, no longer as a slave, but as a beloved brother (Phile.1:16). It was rather painful to his heart, that Paul sent Onesimus back to Philemon, because he was of great value in his captivity and for the Good News Message (Phile.1:13). But Paul did not want to keep Onesimus apart from Philemon’s consent. He offers to pay Philemon whatever he might owe him in connection with Onesimus, from out of his own account. However that may have been, besides Onesimus taking with him the letter for Colosse and Laodicea (= the so-called Ephesian letter?), he also delivered Paul’s personal letter to Philemon.

ecclesia in a house

The house of Philemon, Apphia and Archippus served as the meeting place of the ecclesia in Colosse (Phile.1:2). How large we should think this group to have been is not known, but since they met in a house, they will certainly not have included more than a couple of dozen people. It is very instructive to see how ecclesias in Paul’s days originated. The word was preached, and in a place where some responded in faith, there was an ecclesia. The word ecclesia means “called-out”. An organization is established or founded (including directors and statutes), but an ecclesia is called-together out of the world.