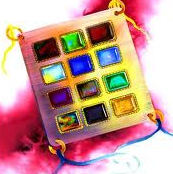 You shall not be injuring the land, nor yet the sea, nor yet the trees, until we should be sealing the slaves of our God on their foreheads. Revelation 7:3

In other words, the sealing of the 144,000 will take place to protect them from the disasters that are about to come over the world. That is also the link to the last verse of Chapter 6, where we read about the panic among the nations, because of the calamity that is feared. All of mankind, in the meantime, has become very aware of Israel’s God and of the program of the Messiah, Who is now seated on His throne in Jerusalem. The great tribulation of Israel is past (Rev.7:14); now it is the turn of the nations of the world. They will also be made subject to the King, but not without a struggle, on the contrary. A large portion of the book of Revelation (&gt;the seven trumpets ) deals with the intense battles of the subjugation of the nations of the world. The appearance on the Mount of Olives for the liberation of Israel, introduces a period of struggle against the nations

3 Then Yahweh shall fare forth and fight against those nations, as the day He fought in the day of attack. 4 And His feet shall stand in that day on the mount of Olives… Zechariah 14:3,4

Isaiah also speaks of this time:

For behold! The darkness is covering the earth, and murkiness the folkstems, yet, over you (=Israel), radiant is Yahweh, and His glory over you is appearing. Isaiah 60:2

Also Habakkuk brings this period in connection with the sixth seal.

11 The sun and moon stand in their residence (=sixth seal) (…) :12 With menace are You marching through the earth; in anger are You threshing the nations. :13 You fare forth for the salvation of Your people… Habakkuk 3:11-13

And with the prophet Joel, it is no different:

31 The sun shall be turned to darkness and the moon to blood, before the coming of the day of Yahweh, the great and fearful day. 32 And it comes that everyone who shall call on the name of Yahweh shall escape for in mount Zion and in Jerusalem, deliverance shall come to be… Joel 2:31,32

What has all this to do with the 144,000? Everything! The fact that the 144,000 from the twelve tribes of Israel are protected (= sealed) for disasters that will take place outside the land of Israel, proves that they will exercise their duties there. “The great multitude” does not require that sealing, because it is in the safety within the land, around the throne (7:14-17). But the 144,000 are “the redeemed of the land” (= Israel; 14:3) and they follow the Lamb “wherever it goes” (14:4). As a group, they form a “firstfruit for God and the Lamb” (14:4). They are the Israelite elite-corps of the King that will prepare the worldwide establishment of the Kingdom.