since when “the Son of God”?


Since when is Jesus the Son of God? The (orthodox) answer from church history is: from eternity. That is already not a Biblical term. This also applies to the expression “God the Son”, the creeds of Nicea and Athanasius speak about. Those are “taught by human wisdom” (1 Corinthians 2: 13). As Biblical as it is to speak about “God the Father”, so un-Biblical is speaking about “God the Son”. The first expression is mentioned dozens of times, the second, on the contrary nowhere. Also logical, because the same Scripture underlines that there is “one God, the Father (1 Corinthians 8: 6; Ephesians 4: 6; John 17: 3). Therefore, Jesus Christ is nowhere called “God the Son”, but consistently “the Son of God”.

Before his birth, he is not called ‘Son’, but “word”, that is the word whereby God created all things (John 1: 3). The same word of God that came to Mary and “became flesh” (John 1: 14). The angel Gabriel also spoke about this, when he came to Mary and said:

… Holy spirit shall be coming on you, and the power of the Most High shall be overshadowing you; wherefore also the holy One Who is being generated shall be called the Son of God.
Luke 1: 35

Clearly and unambiguously the angel declares that the term “Son of God” originates from the fact that God Himself is the conceiver of the child that was going to be born. Power of the Most High would overshadow Mary and make her pregnant. And because of the uniqueness of this conception, Jesus is called elsewhere “the only-begotten Son of God” (John 3: 18). For nobody on earth had ever been born in that specific way. In Galatians 4: 4 Paul confirms this. He writes:

Now when the full time came, God delegates His Son, come of a woman, come under law…

Despite of his exalted position as Son of God as from his birth, Jesus took the form of a slave, becoming obedient unto the death of the cross (Philippians 2: 7, 8). Or as spoken by the Hebrews letter:

… even He also, being a Son, learned obedience from that which He suffered.
Hebrews 5: 8

During the time Jesus was on the earth, he was Son (namely Son of God; 5: 5). Nevertheless his conception in the womb of Mary was not the only time he was conceived by God. When Paul speeches in the synagogue of Antioch, he says:

And we are bringing to you the evangel which comes to be a promise to the fathers, that God has fully fulfilled this for our children in raising Jesus, as it is written in the second psalm also, `My Son art Thou; I, today, have begotten Thee.
Acts 13: 32, 33; also Psalm 2: 7 and Hebrews 1: 5; 5: 5, 8

Without Paul’s explanation in Acts 13 the words ‘I, today, have begotten Thee’ would have directed our thoughts initially to Jesus’ conception in Mary’s womb. But, on further consideration, this option isn’t logical. Because, how should someone be addressed in the stage of a fertilized ovum? No, the ‘I, today, have begotten Thee’ relates to his raising from the death, says Paul. And that is a meaningful explanation, because on the day of his resurrection Jesus indeed could be addressed by his God, with the words “I, today, have begotten Thee”. Note that it’s not written that he only then became Son. He was already Son, but on the day of his resurrection he was begotten again. The same word for ‘beget’ (generate), used by Paul in Acts 13: 33 in relation to resurrection, was also used before by the angel Gabriel, when he spoke about the miracle that would happen in the womb of Mary (Luke 1: 35)

Summarized: since his birth Jesus Christ is the Son of God. First begotten in Mary’s womb – later from death. 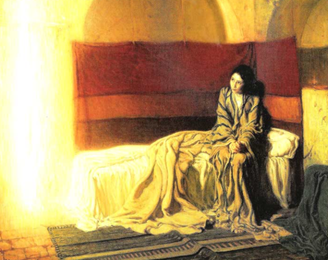