why must the Redeemer be a kinsman?

Boaz is introduced as a kinsman (from Elimelech’s side) Ruth 2: 1. This is of great importance for the course of the story, because only a relative could act as a redeemer. The typological meaning must be clear. Salvation can come about only through Christ’s sharing in blood and flesh:

Since, then, the little children have participated in blood and flesh, He also was very nigh by partaking of the same, that, through death He should be discarding him who has the might of death, that is, the Adversary
– Heb 2:14 –

Many translations speak here of the Adversary having might over death. However, the devil has no power over death, but the power of death (cf. St. Vert: “violence of death”). The devil, as “murderer from the beginning” kills. But Christ has power over death: He can therefore give life!

only one who dies can be resurrected

Christ had to take on blood and flesh (= become mortal), because only in this way He could rise from the dead and thus bring about redemption.

Boaz is a very wealthy man “a man of valor” Ruth 2: 1. That is to say, in order to act as a redeemer, he is able to pay a great price. Of Boaz’s descendant, Christ Jesus, we read, “… who is giving himself a correpondent ransom for all” 1 Timothy 2: 6. That is the message of the Gospel: the price is paid for all – everyone, none excepted, is the property of Christ!

Boaz is not only the protagonist in the booklet Ruth, but also the name of one of the famous pillars at the entrance of Solomon’s temple. The left pillar (i.e. left of the entrance) was called Boaz and the right pillar Jachin (= the Lord’s places the foundation) 2 Chron. 3:17. Left and right coincide here with resp. south and north equ. 2 Chron. 4:10. Left and south in the symbolism represent deprivation and humiliation, while the right and north represent precedence and elevation. The left pillar represents the first coming of Christ in humiliation and the right pillar represents the second coming of Christ in exaltation (when the Kingdom will be established on earth).

Between the left and right pillars, the priest entered and exited the sanctuary. In parallel with this, Christ entered the heavenly sanctuary after His first coming (Boaz) and will soon return to establish His Kingdom on earth (Jachin). The pillars were made, at the place where Israel passed through the Jordan (> death and resurrection; (1Kings.7: 46 compare Joshua 3:16.)

Gleaning ears of grain is a picture of reading God’s Word. After all, ears stand for bread and that is a well-known type of the Word of God. Reading means (at least in Dutch) literally “collecting”. Matthew 4: 4

In Ruth 2: 3 we read that Ruth ended up “per chance” in Boaz’s field. Coincidentally, that means. So there is a coincidence. The point, however, is that it is God who makes it happen.

It is the lot that is cast forth in the bosom; Yet from Yahweh is its every judgement.
– Proverbs 16:33 –

Ruth found grace in the eyes of Boaz Ruth 2:10 CLT. It is the same expression that is also used in connection with the people of Israel in the end time.

Thus says Yahweh: The people, survivors of the sword, found grace in the wilderness; When Israel journeyed to find his respite. – Jeremiah 31:2 –

what is a kinsman?

A redeemer (Hebrew: goel) is a close relative who is called to save his family as far as is able. E.g. to ransom from slavery. Or to buy back lost family belongings. Or to act as ‘avenger of blood’ and thus restore the violated law. The Lord is also often called a Redeemer in Scripture Job. 19:25; Proverbs 23:11; Isaiah 54: 8. After all, in Jesus the Messiah, he has become a close relative. It is He who returns the lost land of Israel to its original heirs. It is also He who, as avenger of His people, will restore justice in the near future. It is He also who paid the ransom for all, so that all mankind will be redeemed as slaves to death 1 Timothy 2: 6. 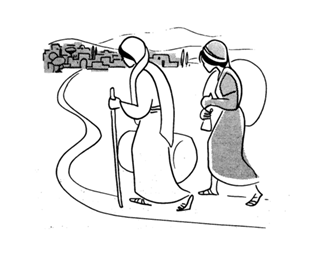