Are you not aware that to whom you are presenting yourselves as slaves for obedience, his slaves you are whom you are obeying, whether of Sin for death, or Obedience for righteousness?

As we have seen so many times before, Paul is again appealing to what his readers are supposed to know. “Are you not aware that …?” Good practice starts with knowing. Because only when you know things can you also apply that knowledge. Every human being, Paul argues, is a slave in any case. Originally, as descendants of Adam, we are slaves to sin. That is not a choice option, but a given. Inescapable. Already in the cradle we were sinners and thus mortals. And hence: slaves “of sin for death”.

But now as believers we are slaves as well. For to obey, that is, to heed – or to have an open ear to the Good news, leads to righteousness. For whoever believes in “Him who justifies the irreverent”, his faith counts GOD as righteousness (4: 5). As a sinner is brought “for death”, so the believer is brought “for righteousness.” Both outcomes are binding and inevitable. A believercannot possibly escape his divinely appointed destiny. What a happy slave he is! 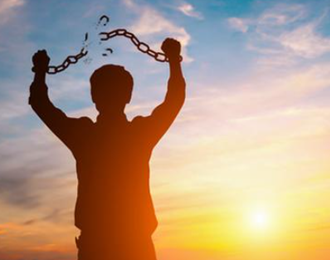