Romans 13:4 – The government as judge


… for not feignedly is it wearing the sword. For it is God’s servant an avenger for indignation to him who is committing evil.

Just after the flood, Noah and his sons are told, “Whoever sheds the blood of a human, by a human his blood shall be shed; for in the image of Elohim He has made humanity” (Gen. 9:6). This is essentially the mandate that the government has from God. Man is given the power to repay bloodshed with bloodshed (=death penalty). This severe sanction underlines the dignity of man, who was, after all, made in God’s image.

Earlier we read in Romans 12:19 that we would not avenge ourselves (individually and as believers) because the vengeance belongs to God. There is only one body on earth that God has entrusted with the power to avenge: the government. She carries the sword as a servant of God. “The sword” does not refer to an army deployed against other governments. No, “the sword” is meant to avenge in indignation, so that reparation (= vengeance) can be enforced. The government is fundamentally a judge: an institution that administers justice by means of the sword. Not less, but also not more. 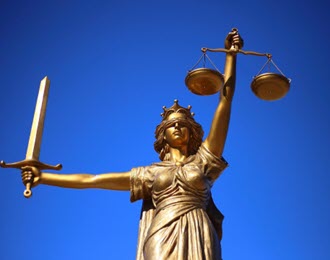