Paul, a slave of Christ Jesus, a called apostle, severed for the evangel of God…

In the book of Acts, Luke consistently calls Paul Saul at first. Even after his calling on the road to Damascus, that remains his name. The name change only occurs when Saul first meets a non-Jew, the governor Sergius Paulus. This man was interested in the word of God but one Elymas, a Jewish magician, tried to turn him away from it. It is from this occasion that Saul is called Paul (Acts 13: 9), and is given the same name as the ‘gentile’ he visited. So not Saul, but the governor is the first man in the Bible to bear the name Paul. The meeting with him marks the name change.

And one more thing: conceived as a Greek word, Paulos is derived from the verb pau-o which means to stop or to cease. Think of our word ‘pause’. And that is exactly what Paul was doing with Elymas: he makes him stop (pausé; 13:10) by temporarily making him blind. Isn’t that typical of Paul’s ministry? The Jewish people are now temporarily blinded in order for the riches of the Evangel to go to the nations! 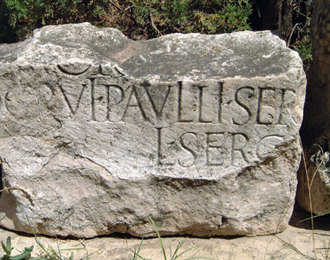