In Acts 27, Luke describes Paul’s journey by ship to Rome. As in a ship’s log, numerous details about the route, the weather conditions and the ship are recounted. It is an exceptionally elaborate account, and that is strange in the book of Acts, which is entirely devoted to the spreading of the Evangel. Why then are there so many details about the journey that ended in shipwreck? There must be a reason why Lucas reports it so elaborately.

The message in ‘Acts’

And that reason is also there. The book of Acts begins with the question of the disciples to Jesus, whether he would restore the Kingdom to Israel at that time (1;6). Jesus gives an evasive answer but foretells that they would be his witnesses in Jerusalem, Judea, Samaria until the end of the land. The fulfilment of this prophecy is described in the first ten chapters. The call to the people of Israel sounded in order for them to repent, coupled with the promise that the Messiah would then return and establish his Kingdom on earth. At the same time, there are increasing signs that Israel does not repent. By stoning Stephen, the Sanhedrin confirms the earlier crucifixion of Jesus.

From promise to warning.

Then a thirteenth apostle is called: Saul of Tarsus. From chapter 13 onwards, he turns to the nations because of Israel’s unbelief. From his mouth there’s no longer the proclamation of Israel’s restoration in those days, but increasingly the warning of Israel’s demise. When he arrives in Jerusalem at a later time (chapter 21), a huge riot arises and he is imprisoned to be finally sent to Rome after two years to account for himself in front of the emperor. When he arrives in Rome, he tells the leaders of the synagogue that the door for Israel has been closed and that the nation will not be restored in those days (Acts 28). Hereby, the question, which was asked at the beginning of the book, was finally answered.

The fate of the ship as an illustration

What does this thread in the book of Acts have to do with the extensive report of the shipwreck in Acts 27? Everything! The fate of the grain ship is illustrative of the fate of Israel in the book of Acts. The ship serves as a model for Israel which goes down in the middle of the nations (the sea). The ship carried grain – a picture of the Word that had been entrusted to Israel. Like Israel, the ship came from Egypt. The ship collapsed because the helmsman and the skipper did not want to listen to Paul’s warning. The cargo of the ship went overboard and the anchors (an image of the hope) had to be left behind in the sea. The ship got stuck and broke in two. This dramatic demise of the ship typifies the demise of Israel a few years later. Forty years after Christ’s death and resurrection, Jerusalem was destroyed and the temple was burned. It signified the end of Israel’s national existence. The sinking of the ship as an image of Israel’s destiny in those days, aptly illustrates the great subject of the book of Acts.

And yet… an Evangel!

If only I will be saved…

After Paul had assured for the first time, to all passengers that they would all arrive safely, we read that the sailors feared, at a certain moment, that the ship would hi the cliffs (:29). With an excuse, they try to get into a lifeboat in order to escape. One lifeboat could not possibly accommodate all 276 souls on the ship. And then it is Paul who firmly tells the centurion and the soldiers (:31):

…”If ever these should not be remaining in the ship, you cannot be saved”

With this Paul did not question the already promised salvation of all. On the contrary: he confirmed this and exactly because of this all human efforts to save themselves are excluded. The commentary of a Dutch commentary summarises it as follows:

The seamen’s attempt to secure their own rescue was at odds with the good news that Paul had sounded aboard. This is the great lesson: GOD’s promise that all will be saved declares all human attempts to assure salvation as unbelief. How much Christian activity is no different from what the sailors were trying to do: to try to escape through a lifeboat. But it is pious selfishness. If only I am saved. Moreover, it is based on own works: my choice or my perception. And it ignores the unsurpassed good news that GOD saves everyone! 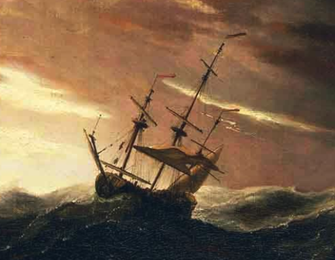