Paul & the Kingdom of God 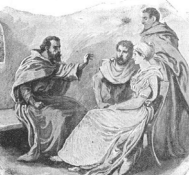 Now he remains two whole years in his own hired house, and he welcomed all those going in to him (Acts 28:30)

Peter and the others of “the twelve” preached in the hope of the soon-coming Kingdom. The all important theme in the book of Acts is the question:

“Lord, art Thou at this time restoring the kingdom to Israel?” Acts 1:6

However, the notable thread in the book of Acts is that Israel, and especially Jerusalem, reject the message concerning their risen Messiah. At the same time, we see how the attention shifts from “the twelve” to the thirteenth apostle: “Saul, who is also known as Paul”; a transition from Israel to the nations; a change from a glorious beginning in Jerusalem to an eventually imprisoned apostle in Rome. Have all these changes caused “the Kingdom of God” to have become a none issue? On the contrary, Paul continues to speak about the Kingdom of God. This he did in Ephesus (19:8) and elsewhere (20:25). And when he arrives in Rome, he also presents this subject to the Jewish leaders, “from morning till evening” (28:23). Why? What did Paul have to say about it? Listen to what he, in conclusion, said to the Jewish company:

Let it be known to you, then, that to the nations was dispatched this salvation of God, and they will hear.” Acts 28:28

Paul made known in Rome what he had everywhere declared in the synagogues: the message of salvation is no longer addressed to Israel, but to the nations; without distinction. With this, the Kingdom would (temporarily) not become evident, but remain hidden. It was precisely about this that Paul had much information to share. During the two years he was imprisoned in Rome, that remained his focus.

30 Now he remains two whole years in his own hired house, and he welcomed all those going in to him, 31 heralding the kingdom of God, and teaching that which concerns the Lord Jesus Christ with all boldness, unforbidden. Acts 28