This week we experienced the shortest day of the year. That is: no other date of the year the time between sunset and sunrise is as short as this day. As from that date the days will lengthen again. Because of that, already long before Common Era, the midwinter festival or the solstice was celebrated.

When Christianity became the official religion in the Roman Empire, all sorts of existing rituals, and also this celebration, were christianized. But the idea that Jesus would be born at December 25th, in a winter night, is for sure not biblical. The same applies to other familiar elements of the Christmas celebration. Did you ever read in the Bible about a stable in which Jesus was born? Or hay and straw where He was laid in? Or an ox and a donkey standing there? Or three kings who came to visit?

But why was it necessary to christianize the solstice? Doesn’t  this physical phenomenon show  Divine in itself? Doesn’t it point to Him who shines the light of His promise in a dark night? Since Adam the promise sounded of ‘the Seed of the woman’, who would come and then would hurt the head of the serpent. The 48 signs of the Zodiac image this promise in detail. From the constellation Virgo until the Lion. ‘The heavens are recounting the glory of God’ (Psalm 19: 1) and this is heard since time immemorial.

The solstice in late December demonstrates the light that overcomes the darkness. How dark and cold it might be in the world, GOD has spoken. The Light, and therewith Life, is stronger than darkness and death. The symbols of midwinter festival point to light (candles, fire, snow) and also to life: the evergreen tree full of fruits. The Good Message in a nutshell. As darkness is associated with death (shadow of death), light is associated with life. ‘The light of life.‘ It speaks of Life that was revealed definitely, early in the morning, when the big stone was rolled away from the tomb. Isn’t it great to be determined precisely in the darkest days of the year to this victorious Light? The entire world is caught in sin and death. That is a fact. Through Adam sin entered into the world, and through sin death, and thus death passed through into all mankind. But Someone is more than Adam: ‘the last Adam’ (1 Corinthians 15: 45)! He is the guarantee that all mankind (‘each in his own class’) will be justified and vivified (Romans 5: 18; 1 Corinthians 15: 22)! What a light in the darkness! 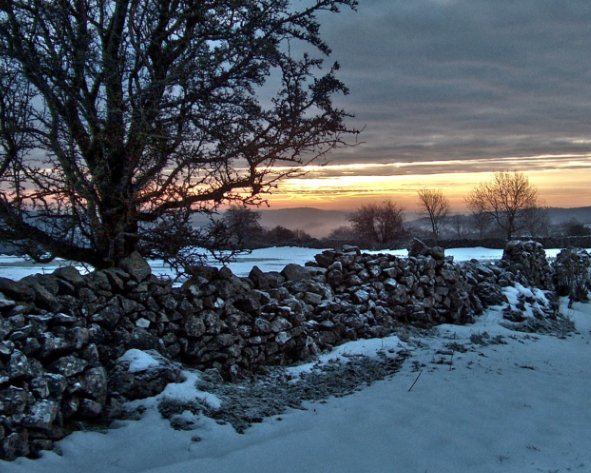