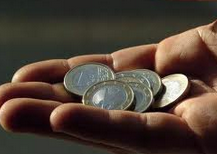 With some regularity, I receive mendicant letters from evangelists. A pathetic show, in my opinion. Such letter are erroneously justified on the first part of 1 Corinthians 9, where Paul parries the attack (9:3) that he is not entitled to receive support (9:4-6). The apostle explains the principle that those who preach the evangel also have the right to live off the evangel (9:14). He illustrates this with a soldier receiving pay, and who plants a vineyard eats of the fruit thereof, and who shepherds a flock enjoys the milk it yields (9:7). And also in the law, it was so regulated that even a threshing ox was not to be muzzled (9:9,10) and who served in the sanctuary received a portion of the altar (9:13). These arguments Paul presents in defense that preachers are entitled to receive support. But does this justify sending mendicant letters? No, on the contrary! Those sending mendicant letters only read the first half of 1 Corinthians 9. The remainder of this chapter is an indictment against this practice. What Paul is explaining is that, by now, he cannot, scripturally, claim the right to support. He would rather die than ask for support (9:15). This is being said, note well, by an apostle, someone who is directly and in person delegated by Christ Himself (9:1.2)! No one, today, can claim something similar, but even as apostle, Paul makes no claim for compensation (9:17). Instead, he considers it a great honor to herald the Evangel free of any charge (gratuitously), and if necessary, to work with his own hands to make a living (9:18; 2Thes.3:8). Against this background, the practice of religious preachers who ask for money, is typical: it demonstrates that they do not know the Evangel that is absolutely free (gratuitous). Their message comes with a price tag. Dear reader, don’t be fooled by pathetic calls or feelings of guilt. Throw such letters straight into the trash can. Paul defends the right to receive support in 1 Corinthians 9, but did never claim it on that basis. It is not a duty, but a privilege and a gracious favor (=joy) to share in the work of the Lord. He foresees… always and richly so (Phil.4:19)!