| Blog English | Luther himself about his 500th jubilee year

Luther himself about his 500th jubilee year 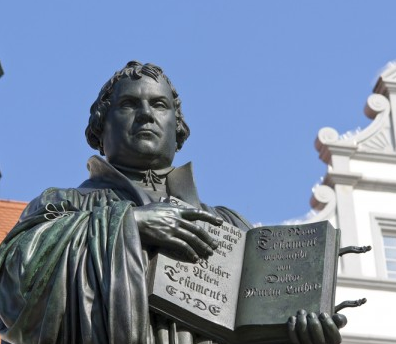 It will be something most of you didn’t miss and if so you will find out soon that 2017 will be a jubilee year of the Reformation. Next year it will be exactly five hundred years ago that Luther nailed his famous 95 theses on the church door at Wittenberg. That was in 1517. But did you know that Luther some years afterwards (1540) wrote a booklet about what would happen 500 years later? Did you know that Luther was very outspoken about the special significance of this jubilee? It’s like this. Luther wrote a booklet in Latin about the Biblical chronology entitled ‘Calculations of the years of the world’. In it he calculated that the year 4000, counted from the creation of the world (Anno Mundi) coincides with the year 40 AD (i.e. after Christ). I will leave it for how he got to this exactly. I won’t elaborate either on the 6 year difference between Luther’s’ conclusion and the chronology I recently wrote a series of articles about. In view of this blog that difference is not really noteworthy, on the contrary, the similarity is striking. Anyway, Luther continues his calculation and determines that the year in which he wrote this booklet is a jubilee and coincides with the year 5500 AM. In the first edition of his booklet Luther starts his preface with the following citation:

By the way, what Luther brings forward here was not a new thought at all in his days. Even the Talmud, which predates our era, mentions it. Also various early church fathers like Irenaeus presumed this arrangement of history. The Jews had the idea that the Sabbath of the world, the Messianic reign of peace, would last for a thousand years and would be preceded by six days of a thousand years of human history. And it is Peter whom in his last letter emphasizes and writes that the Lord counts like that indeed: one day is to Him a thousand years (2Pet.3:8). Luther took the standing that, when he wrote his booklet (23 years after the start of the Reformation), the world would have 500 years to go. Because if the year 40AD corresponds to 4000 AM then there is no other way than that the year 6000 AM will start in 2040 AD. Luther thought in line of the early church fathers but also of the Jewish rabbis (Yes, Luther consulted Jewish sources!), that many of the ones reading these lines at this moment, are likely passing through the end of this eon! Luther in his days was looking forward to the days of our generation. He was not thinking of festivities, concerts, expositions or the release of all sorts of trumpery. No, he was thinking of a Godly intervention, the climax and fulfilment of world history! And now it is almost time……who is awake?