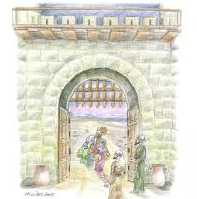 Of Abraham’s nephew, Lot, we read that he sat in the gates of Sodom (Gen. 19:1). The gate, in the Bible, stands for the place where political power and control is exercised (2Sam.24:18; Ruth 4:1); where literally the in’s and out’s of the city were regulated. But instead of Lot’s influence making the city better, he made things, for himself and his family, only worse. He acquired no goodwill, but squandered that precisely by trying to prescribe the law to his fellow citizen (Gen.19:9). This history of Lot makes me always think of Christian politicians. “Day after day they torment their righteous soul” (2Pet.2:8) and they are busy with trying to stop all kinds of evil which they identify. But the effect is usually counterproductive. For example, do they defend a “decline-official” (who refuses to marry a gay couple) than the libertines smell blood and the end of song is that the legislation is less favorable for these officials. Every time Christian politicians are having to back down due to their ‘ethical’ spearheads, such as abortion, euthanasia, gay marriage and Sunday rest. Tragic “Lot-cases.” But also so-dumb (so-dom), because the problems which Lot encountered were entirely foreign to his uncle, Abraham. He behaved like “a stranger and a sojourner” in the country (Gen.23:4) and did not care about politics. He acquiesced. But for this reason, what a testimony went out from him (Gen.23:6)!