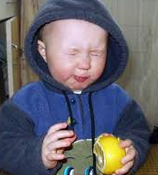 In Galatians 5 verse 9, Paul writes, “A little leaven is leavening the whole kneading”. He is referring to the message that was preached in Galatia. They had become believers under Paul’s preaching of grace and freedom, but had given way to a preaching of law. They had believed ministers who had come in to “Judaize” them, i.e., to make them live a Jewish lifestyle (Gal.2:14). Paul’s response is: you have begun in the Spirit, and now you want to be completed in the flesh (3:3)? The Galatian believers were justified without works of the law, but to live this justification and keep it, they now needed to have works of law?! How exceedingly inconsistent! Any message that demands such things or even expects it of man, is leaven. Even a tiny bit of such an idea, spoils everything. I remember many sermons where God’s grace was abundantly expounded and it made me happy… until a “but” was injected. Everything is grace, BUT… That “but” is fatal for grace. Grace means: joy that is freely given (gratis). Set one condition or ask a small compensation, and grace is no more grace (Rom.11:6). This, at once, leavens (sours) the whole message. A leavened (soured) message will also have its effect. Instead of it making believers happy, it makes them frustrated. It rankles them, because they do not (cannot) measure up to the requirements. As well, because of failure-to-measure-up is seen in each other, it spoils mutual relationships. Completely in line with this, Paul, in Galatians 5, speaks about believers “biting and devouring each other” (5:15). That is what leaven (the loss of grace and graciousness) does: it bites and finally devours. Leaven is a small piece of dough from the previous day. Of ye(a)sterday. In the risen Christ, we are a new creation and the old (yeast) has passed by (Gal.6:15; 2Cor.5:17)!