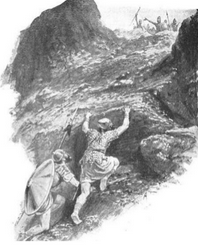 First part of a summary of a Study about Jonathan’s Heroic Deed (1Samuel 14:1-30). The situation for the Israelites in the days of King Saul appeared hopeless. The Philistines had deeply invaded the land (13:16) and several groups of Philistine marauders terrorized the people (13:17). In addition, Israel was largely disarmed, because the Philistines had made machining metal, impossible (13:19). 1Samuel 14 describes how Jonathan, without King Saul’s knowledge, engages the Philistines in battle. Concerning King Saul’s reign, it was already becoming evident that it would disappear (13:13). The hope was pinned on the next generation, and Jonathan was its embodiment. Jonathan was especially known on account of his close association with David, the model of the enduring dynasty: the House of David. In Jonathan, David’s shadow was being projected forward. The action of Jonathan in, 1Samuël 14, exhibits many similarities with that of David, a few chapters later (chapter 17). Both went, independent of others, up against an overpowering enemy, in the realization that God can deliver by few as well as by many (14:6). This specific activity of Jonathan was completely unknown to King Saul and the people. While Saul was sitting under a pomegranate tree, he was, apparently, not aware of its significance. The pomegranate (tree) refers, via its name (Rimmon), to a high place, but also to the high priest who, in the sanctuary, wore this fruit (Ex.28:33). This speaks of the present time in which the Christ is exalted in the heavenly sanctuary; but hidden. The people of Israel who live under the rule of the old covenant (Saul!), have no knowledge of this. The verbose manner in which the great-grandson of Eli is mentioned, especially underlines the sad situation. Achia, the priest, was a nephew of Ichabod, which means: the glory is gone (14:3, cp 4:21). Together with Saul, this is not a promising combination. The garrison of the Philistines in Michmash (about fifteen miles north of present-day Jerusalem) was located between two rocks, one in the south, the other in the north (14:4,5). The one in the south was called Senne, which means “thorns” and the rocky outcrop in the north was called Bozez meaning “shining”. The route that Jonathan had to take, lay between these two points. It is typical of the position of Christ at the present time; located between his first coming in humiliation (thorns) and his future appearance in glory. Humiliation and glory, respectively, in the south and in the north. Comparable to the starry heavens, the constellations Southern Cross and Northern Crown. The name Michmash (13:23, 14:5) is derived from a verb (Str.#3647) that means “to store up” (Deut.32:34) with the derived meaning: ‘hiding-place’. This underlines the secret in which the decisive victory took place. Jonathan goes into battle against the uncircumcised (14:6). It is precisely the sign of circumcision which speaks of victory. Life from the dead. A new beginning: the eighth day! Jonathan forms a unity with his armor bearer (14:7). He goes first and his weapon carrier follows him wherever he goes. As Jonathan represents the Savior, then it is not difficult to recognize in his armor bearer those who follow the Savior during the time of His hiding. If the men of the garrison will say, “ascent to us” (14:10), then that invitation will be for Jonathan the signal of YAHWEH that victory is already a fact. The scorn of the Philistines (14:12) for the courage he showed (compare with David; 17:43), did not stop Jonathan; on the contrary! When Jonathan has climbed up to the level of the garrison, on hands and feet, then it says, literally, (14:13) that the men fell before him. At that place, Jonathan made a beginning with the deliverance of Israel. The people still knew of nothing, but the decisive defeat was inflicted on the enemy. And even, as ever in the morning in which death was overcome, an earthquake took place (Mat. 28:2), so also here (14:15). It speaks of the world-shattering (!) fact that the principalities and powers were stripped and disarmed, when the sealed stone was rolled away. On the area of half an acre of land, twenty men were slaughtered (14:14). Does the number twenty not refer to the time between the first and second coming; as also the twenty years that Jacob sojourned outside the land, speaks of this? Twenty centuries, two thousand years. After defeating the twenty men and also on account of the earthquake, great confusion developed in the army of the Philistines and they began to fight each other, within their camp. Lookouts of Saul’s army saw the tumult amongst the enemy and also Saul became informed of the situation (14:16). He orders an investigation and finds out that Jonathan and his armor bearer were missing and that they apparently are responsible for the noise on the other side (14:17). Now that Saul knows about the situation, there is a need for action. But how and what? He calls for the priest to bring the ephod* (14:18) to receive clarification, but while Saul still was speaking, it became clear to him what to do. He assembles the people (14:20) and coming to the place of battle, they saw that the Philistines were busy with fighting each other. The men on the mountains of Ephraim, who, thus far, had stayed out of sight, now also came to the fore. Then the Philistines fled, head over heels, partly due to the sudden appearance of superior forces. *The Masoretic text speaks of the ark of God but the LXX of the ephod. The latter gives a much better sense here (see also 14:3). The spotlight in this narration (14:1-14:23) is focused on prince Jonathan. Completely unknown to Israel and in secret, he gained the victory. It speaks of another Prince, who also won the victory over the enemy. To the present time, it is a secret, but when, before long, the twenty centuries will have passed, Israel will be informed of the heroic deed of the Prince and will, then, also share in His victory!