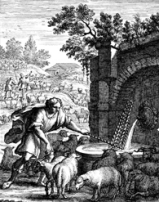 In the previous weblog, I referred to the staff wherewith Jacob passed through the Jordan River, as being a beautiful picture of the expectation of the resurrection. Yet, there is another earlier occasion where a staff and staffs played a role in the life of Jacob. That we find in the remarkable narrative about the time of his lodging with his uncle Laban, in which he acquires large herds of cattle (Gen.30:25-43). Jacob had made the agreement with His uncle that all the speckled young cattle that would be born in Laban’s herds would become his. When Jacob in the ensuing days was watching over the herds of Laban, he laid in their drinking troughs peeled twigs or sticks. Literally, the word for ‘staff’ or ‘rod’ is used. Jacob assumed, when the cattle would come in heat and drink the treated water, the newborn cattle would be speckled. Regardless, whether or not this came about through Jacob’s trickery, it was very successful. Jacob’s herds increased, more and more. cut staffs The point is that Jacob was suggesting a connection between the forming of the herds and the cut staffs, because that was the idea behind his method. He peeled the twigs (rods/staffs) in order to bare the white under the bark (31:37). It was as if he were performing a circumcision… at which also a staff or rod was cut: the foreskin was removed to expose what lay under it. In the year 2011, in the eyes of modern man, the primitive ideas of Jacob are ridiculed, but that says more about us than about Jacob. Our conception of this falls hopelessly short. We do not anymore know what typology means, and have become, with respect to it, illiterate. Jacob understood that a staf represents a male symbol and that’s why he cut it. Also in this narrative, the staff, whenever ‘the peeling’ is removed from the text, refers to Him Who brings forth new life! ——————————— translation: Peter Feddema